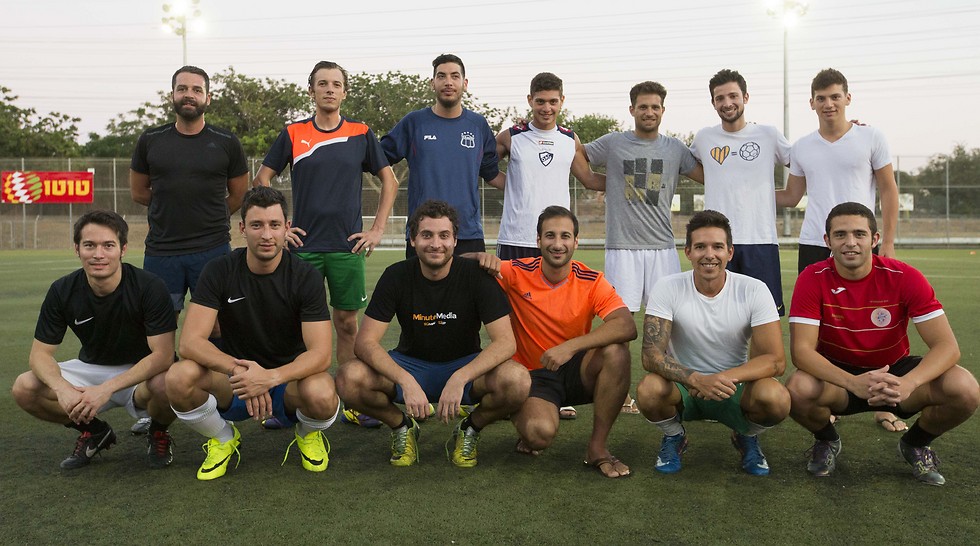 Oleh, oleh! The most international soccer team in Israel

Brazil, the Netherlands and England are just some of the birth countries of players from the Inter Aliyah TLV soccer club in the Fifth Division, made entirely of new immigrants to Israel; the team, they say, can help maintain the ties between the Jews in Israel and those in the Diaspora.

A Brazilian, a Dutchman and a Hungarian... no, this isn't the start of a joke. These are just some of the birth countries of the players in a new and ambitious soccer project.

After winning the amateur league championship for new immigrants last year, Danny and Ricardo, two new immigrants from Ecuador, decided that they wanted to see just how good they were.

They registered with the Israel Football Association and founded the Inter Aliyah TLV soccer club, with a lineup of players from all over the world. And now they're heading for the Fifth Division.

The main reason for founding the team is their desire to maintain the connection with the Jewish Diaspora. They're not afraid to declare that their goal is to win the hearts of the Jewish communities worldwide and with that serve as the sports connection between Jews in the Diaspora and those in Israel.

Despite the fact they don't know much about local soccer, the players believe in their ability to compete against the Israeli teams and move up the divisions.

Photo: Oz Mualem
The seriousness with which they treat their team and the division makes one forget the fact this is the lowest division in Israeli soccer.

Their vision is a sports team that plays for years to come and serves as a home for new immigrants.

Photo: Oz Mualem
Danny, a new immigrant from the Netherlands, believes that such a team can help immigrants integrate into Israeli society. In his view, competing together and doing other activity as part of the league could help immigrants better connect to Israelis.

Sam, who made aliyah from England seven years ago and has since served in the IDF as well, had an interested answer to why not join an Israeli team.

"The Israelis fight too much and kept calling out 'hand, hand!' In England, we say: Let the feet do the talking."

Photo: Oz Mualem
What's certain is that Israel's national sport is getting an international boost. This time in the Fifth Division.