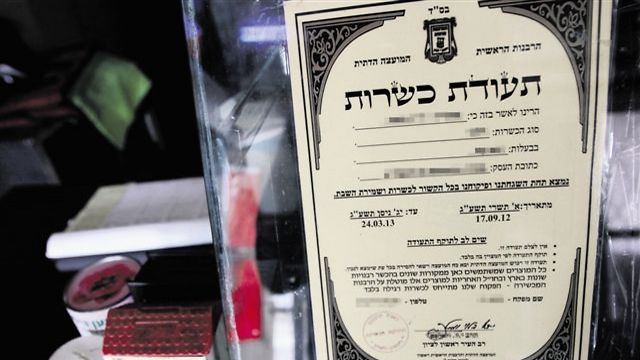 The general public's aversion to the Rabbinate's aggressive reign over matters of religion signals that going against its monopoly on kashrut may very well win out.

When Yuval and Lin Djamchid decided to open a café in Eden Hotel, their intimate, 24-room hotel in Jerusalem, they knew they wanted it to be kosher, but not to have the traditional supervision from the Jerusalem rabbinate. So they chose Private Supervision, a new movement led by Rabbi Aaron Leibowitz, an Orthodox rabbi who is also a city councilor from the Yerushalmim movement, which is trying to revitalize Jerusalem.

“It was a matter of principle,” Yuval Djamchid told The Media Line. “We don’t like the Rabbinate and what it represents. We have enough problems without worrying about the Rabbinate. Besides, everything here is kosher, and we are observant ourselves. ”

Some restaurant owners claim the Rabbinate err on the side of strictness. The owners were forced to purchase special, hydroponically-grown vegetables, as they have fewer pests that deem produce non-kosher. There were also complaints of corruption, specifically of kosher supervisors spending only a few minutes each week in each restaurant while still demanding large sums of money. Djamchid said the rabbinate wanted $500 per month, while Private Supervision asks just $150. He said the inspectors, all women in a field usually dominated by men, are easy to work with. Regardless, Djamchid admitted that he may be losing business because of his choice. “Jerusalem is a small town and many people know Rabbi Aaron and trust him,” he said. “But we have had events where people say they can’t come because we don’t have the Rabbinate's supervision.”

Founded just two years ago, Private Supervision now works with 27 restaurants in Jerusalem and Tel Aviv. The Rabbinate recently challenged the new movement in court, where it was ruled that only the Chief Rabbinate can grant an official kosher certification. This caused Private Supervision to remove the word “Kosher” from its certificate.

An official Rabbinate kashrut certificate (Photo: Avi Moalem)
Instead it reads, “We regard the trust put in us by Rabbi Leibowitz and his team regarding the activities of the business as being of sacred social value. We will make every effort to abide with the conditions they have set for us so that the community can eat with us safely. ” Private Supervision said they are all about offering an alternative to the traditional establishment. “The Rabbinate has a monopoly on kashrut, and once there’s a monopoly bad things happen,” said Ayala Falk, the CEO of Private Supervision. “We think that an open market is better for everyone. We present an alternative.” In the US, there are several bodies that can give kashrut supervision. A spokesperson for the Jerusalem rabbinate was not available to comment, but in the past has said that only the official body of the Rabbinate can make sure that consumers are getting strictly kosher food. The new movement is part of a growing dissatisfaction with the Israeli Rabbinate. Over the years, the Chief Rabbinate has become more hard-line and ultra-Orthodox. Many modern Orthodox and “traditional” Israelis, who keep kosher but might not keep the Sabbath as strictly, say it’s time for an alternative.