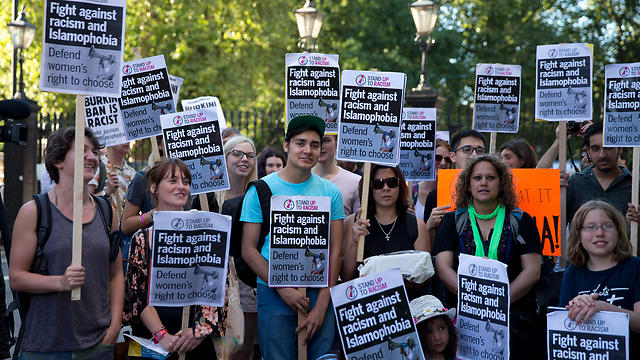 Op-ed: The current debates around raising the national flag or banning the burqini shine an important light on the importance of patriotism and the dangers of zealous nationalism and or a border-less world that strives to live by the alluring words of John Lennon.

If I understood the recent “Flag Bill” promoted by MKS Oren Hazan, Nava Boker and David Amsalem (Likud), I would probably support it. I’m all for healthy patriotism with all the ingredients that make up the bills promoted by such peanut gallery Coalition MKs: the flag, the national anthem, patriotism and national pride. However, I am extremely averse to the kind of would-be patriotism that such ridiculous, “Yes, Minister” bills try to promote.

Patriotism is a must-have in countries like Israel. Without it, you can’t insist on a mandatory army service or call upon students and parents to do reserve duty in the middle of summer. You can’t explain why you need to pay so much in state taxes. And as far as I’m concerned—though it cannot truly be verified—a healthy dose of patriotism is an essential part of why we manage to stand each other during the sweltering months of July and August.

Photo: AFP
The other option that acts as an alternative to patriotism is life as John Lennon envisioned it in his song “Imagine”: “Imagine there’s no countries,” he wrote. “Nothing to kill or die for.” A world without race, sex or religion. In other words, universality, an nation-less global perspective. Extreme liberalism without borders or barriers. It’s a pretty, messianic vision, albeit a dangerous one.

The first down payment for a world without borders is already visible in Western economy. Globalization allows us to transfer entire industries and services to Third World countries with lower pay. It allows most of our patriotic flags to be made in China, so that the flag we so proudly wave is made by a Chinese worker who has no idea what they are making. The same goes for all other national flags. It was globalization that allowed the return of abolished slavery into mid-19th Century America: workers without basic protected rights, without minimum wage and without the supervision of the National Council for the Child.

Another down payment for this vision is the war of civilizations and terrorism. When you have no borders, waves of immigrants come out of the Third World and into the West (this last decade, for instance, there have been more refugees than during WWII). The inclination of some Muslim immigrants to shout “Allahu Akbar” is only part of the problem. The effect that terrorism has, even when factoring in the larger attacks, is at the end of the day limited. The cultural changes, however, affect the entire Western world. The clash of cultures is centered around a clash of values. In a world without borders with a penchant for extreme liberalism, every infiltrator or work immigrant is considered a refugee who must be taken in, and it is Freedom of Speech allows imams to incite their listeners in mosques throughout Britain, France and Germany, and to rise up against the countries they are staying in. The individual rights upon which the West was founded are what is preventing expelling these imams after they are found to be engines of Jihad.

Between Cannes and Beit She'an

There are self-appointed experts to fascism in Israel, people who see every symbol, every round of applause for a medal won at the Olympics and every Zionist conversation as a basis for comparison to much darker days. In reality, though, Israel is managing to balance the need for patriotism and liberalism a lot better than most Democratic countries. Take, for example, the current fight against the burqini in France. The fear of religious and cultural coercion of Muslim immigrants and movements looking to instill Sharia law (which exist in almost every Western country) is what is presently pushing municipalities to prevent Muslim women from going to the beach dressed any way they see fit. The burqini—a bathing suit that covers a woman’s body and leaves her face exposed, while the men parade around with their exposed, hairy chests—has become a symbol. Europe is finding itself unable to handle John Lennon’s “Imagine.” How do we protect liberal values when faced with women who prefer, under the orders laid down by men, to cover themselves up from head to toe even when they go to the beach. In Israel such a battle would never happen; there are ultra-Orthodox women who dress like they’re in the Taliban, and despite this deviation from Judaism and common sense, they’re allowed to walk around as they please.

The main reason for this is that despite what European liberals have to say about Zionism and its products, the Israeli national movement was built as a system of balances, as did the State of Israel. Jewish American legal expert Alan Dershowitz, who has become one of Israel’s best English language explainers and defenders, claims that this is due to the fact that so many of those who helped found it were legal minds themselves (Herzl, Ben-Gurion, Jabotinsky, Begin, Shamir); this as opposed to other countries, which were built mainly by generals. Whether he was right, or whether it was the philosophers and dreamers who had built this country and who were to thank for this saving grace, the result remains the same.

Those who claim that Israel also harbors nationalism are just as correct. Every country does. The difference between patriotism and nationalism is the emotion each of them helps cultivate: for whereas patriotism helps cultivate the love of one’s homeland, nationalism grows the hatred you feel for your enemy. In our case, it is the Arabs. Cultivating a symbol isn’t nationalism, despite the ignorance of those fascists who grow to hate. Belonging is an essential part of human nature, as disasters can clearly show: when our soldiers are killed during a military operation, our hearts bleed more than for an accident involving a Russian plane and its civilian passengers. There are liberals, great globalization supporters and chivalrous world justice warriors who are sitting right now in France or the University of Berkeley, sipping wine as hundreds of thousands of Syrians are being slaughtered. The horrifying photograph of a young boy who was pulled out of the rubble of his house in Aleppo shocked the world, but only briefly. I suppose that most parents who saw the photo thought, like I did, of their own children. But that’s where it ended. Because the truth is that I amdifferent than "the other," and that you cannot love all people equally. Your own nation’s citizens take precedence, at least under healthy patriotism.

Forget about the Tikvah

This is where the discussion returns to that same bill that aims to prevent MKS from attending any event where the Israeli flag would not be raised. Apart from the fact that the Arabs and ultra-Orthodox Jews who would find themselves at these events would likely not identify as Zionists, such proposals make patriotism into a joke. Instead, what I’m concerned about is the fact that in a few years, most Israelis won’t know how to sing the Tikvah, since over half of them currently do not learn in the Zionist Public Education system (as 54% of students are Arab or ultra-Orthodox). I’m concerned that they’ll grow up to be ignorant in history. That in 12 years, my kids will be part of a small minority that still serves in the army. I’m concerned that having IDF soldiers volunteer once a year in the community will become a political battleground, as if any of it is that consequential: why can’t you decide on an immigration policy and expel the families of those deemed to be infiltrators, while at the same time trying to make sure the children of those families suffer as little as possible while their fate is decided? Most of all, though, I’m concerned about the lack of self confidence that is currently being folded into Zionist identity, which allows the idea of patriotism to be taken for a ride.