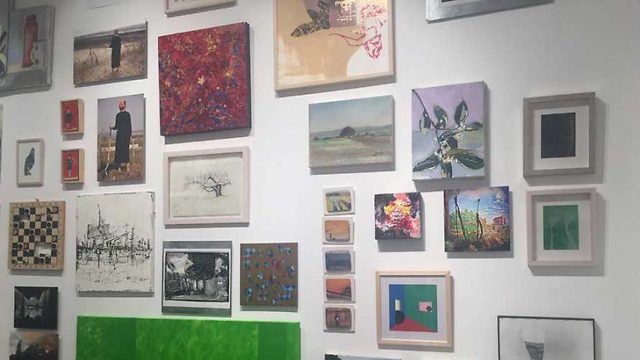 Jerusalem's contemporary art scene offers authentic moments of life while dealing with the ever-present tension of such a historic, multi-cultural city.

On Trumpledor Street in the Nachlaot neighborhood of Jerusalem, there are 270 degrees of city-commissioned street art surrounding a construction site for The Jerusalem Art Campus, a new art institute that will include an acting school, a film school and a music school. The ephemeral art that adorns these white walls is its own gallery. In one section, there is a mural created by street artist Pesh, which features a black background with white polka dots and a large cat with two dogs on either side. The animals are very angular and all share the same light blue, red, white, and light brown coloring. Along with this mural, there is another painting created by street artist, Faluja, which features a large blue lion head on a red, green and yellow background with the words “Rise and rise again until lambs become lions.” Coined the Menorah Project and featuring the works of artists like Jack TML—a street and graffiti artist in Jerusalem known for his work with charcoal spray paint—and 13 other street artists, is part of a larger project to decorate temporary construction sites in the center of the capital, a city seemingly always under construction. Contemporary art, which can be defined as art that is relevant to the issues and ideas of the present, is largely unrecognized in Jerusalem, a city deeply rooted in its past. When tourists visit the Holy City, they do not necessarily come for the art. However, with two art schools and the emergence of new public galleries, city-commissioned street art and commercial art galleries, the small and obscure Jerusalem contemporary art community is slowly gaining more attention. “The art scene is small, but very vibrant and growing,” said Jenna Romano, founder of the blog Contemporary Art in Jerusalem. “Because (Jerusalem) is not so commercialized, a lot of the galleries are co-ops and artists are running their own galleries, and a lot are city funded. This really leaves a lot of room for a wide range of creativity without the pressure to sell and without the pressure to buy.” Among these contemporary art galleries is the Jerusalem Artists House, a public gallery in the city center affiliated with the Bezalel Academy of Arts and Design. For the past 20 years, the gallery has been committed to exhibiting seven emerging artists annually in solo exhibitions, in a format known as the Young Artists Project.

Art exhibit in the Old City (Photo: Medialine/courtesy)
“All leading artists in Israel started here with this project,” said Ruth Zadak, Director and Chief Curator of the Jerusalem Artists House. “We believe that art should be for everyone and that’s why sometimes you can find a priest from the church around the corner and an ultra-orthodox Jew viewing the same work of art,” she added. There are also a number of co-op art galleries in Jerusalem where groups of artists run, curate and exhibit their own work. Agripas 12, near the Mahane Yehuda Market, is one example. With 15 artists in residence, each has a solo exhibition for four or five weeks, and they are responsible for raising money to keep the gallery afloat. Along with the emergence of more public galleries, two major art institutes, Bezalel and Hadassah, are also located in Jerusalem, increasing the number of young artists in the area and greatly contributing to the influx of experimental contemporary art in the ancient city. “There is a paradox here," said Zadak. "On the one hand, it is the most pluralistic city in the world, and on the other, it is the most extreme, because you have to live with everything that is different from yourself. You have to practice your pluralism from morning to night. This generates a lot of curiosity.” Living in a city so rooted in the past and as politically and religiously contentious as Jerusalem allows for art to serve as an expression of personal beliefs and attitudes. “Jerusalem is a place that, for better or for worse, lives in the shadow of history and politics and religion,” Romano said. “Contemporary art is significant here because there is such a modern culture—not just in art but also in music and fashion and food—and there is a whole modern dialogue and perspective in the city that many people aren’t familiar with. Contemporary art opens up a dialogue for locals and for visitors.” However, the dichotomy between the old and the new remains. Art commissioned by the government and other institutions makes an effort to bridge the gap between the old and the new. “Some people are scared of the buzz in Jerusalem, but this buzz is part of what makes Israeli art beautiful. There is a feeling that Jerusalem artists are creating things that honestly reflect what we have here in the city,” Choni Beigel, an industrial design student at Bezalel explained. According to Zadak, these younger artists can engage in experimental work because they do not depend on the money. “The freedom to create is in Jerusalem, but the money is in Tel Aviv,” Zadak said. There is only one commercial art gallery specializing in contemporary art in Jerusalem—the Rosenbach Contemporary Art Gallery. It has been open for a little less than a year. Gallery head Uri Rosenbachsaid that he hopes to expose local artists to overseas clients. “I thought that the way to do this was first to open the gallery in Jerusalem and building on that we can participate in art fairs and exhibitions and create contacts with foreign galleries.” The contemporary art scene in Jerusalem is not limited to Israelis and Israeli art. Al Ma’mal, established in 1988 by a group of cultural activists and artists from Jerusalem, is a Palestinian art foundation located in Jerusalem’s Old City aimed at raising awareness and promoting Palestinian artists. “Contemporary art is really important because for Palestinians, the medium of art is a response to the political situation,” said Aline Khoury, Programs Coordinator at Al Ma’mal.

“(Al Ma’mal) focuses on Jerusalem as a center, not just as an area characterized by politics but also a place for social engagement, activities and culture. It is really important to focus on Palestinian identity and cultural heritage, especially in the Old City, which is losing its identity with the current political situation,” Khoury added.