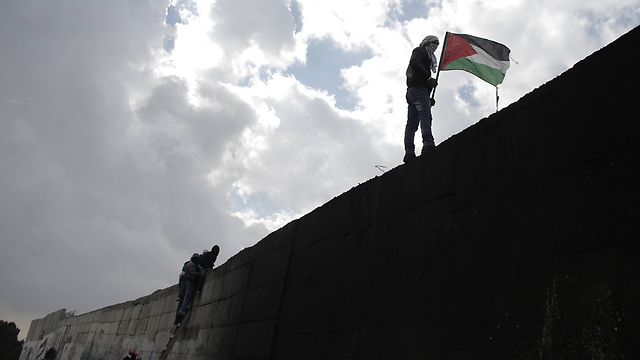 A response to a leftist patriot

Op-ed: Contrary to the talk about a status quo or a binational state, Israel is separating itself from the Palestinians wherever it can. With the absence of government decisions, things are dictated by reality.

Where are we headed? A letter of response to M. Let me start by saying that I believe you. You really and truly believe that the war 50 years ago is the source of our current problems. A Pyrrhic victory, you called it in the letter you sent me. The root of all evil. Thus, even before we begin arguing about the present, we begin by arguing about the past. After all, it all begins with memory and the way we choose to shape it.

A wall built a decade ago placed more than 100,000 Arabs outside Jerusalem. Within a decade, they will probably no longer be Israeli citizens (Photo: AFP)
Do you understand? In my opinon, the Six-Day War is a defensive war which ended with a huge victory. A glance at the writings of the volunteers who dug thousands of graves in anticipation of the worst allows one to understand the concept of survival. The small and beleaguered Israel survived and succeeded for the first time, 19 years after its establishment, to loosen up and sit comfortably on the sofa of history. We occupied Sinai, the Golan Heights and Samaria. We expanded our narrow waist—not in the name of a messiah, but in the name of strategy. Yes, even in the era of sophisticated missiles, the land is important and wars are primitive. And if we skip forward to the present and try to be more accurate, the problem is no longer that war, but that which subsequently transpired. The presence in Judea and Samaria is what bothers you. The settlements. The “Judea Kingdom,” as you put it, which is being established under the nose of secular, liberal Israel. The troubling relationship with the Palestinians. The threat of a binational state. You noted that you do not expect the Golan Heights to bring peace. That’s because you are a rational person. There is no one to make peace with, there are no settlers there and no Palestinians. But what was your stance 20 years ago? Let’s leave that question open. Well, in order to answer you, allow me to ask you to fly high because “you have wings of the spirit,” as Rabbi Kook wrote. And no, I am not mentioning this because I am predisposed to a messianic doctrine as a result of my childhood in a settlement, but because you shared your personal story at the beginning of the letter. You served as a combat pilot in the Air Force for many years and you are a successful businessman, a man who has contributed to the state (as you rightfully noted), who has done everything in his power to ensure its security both for today and for the next generation. I appreciate that and I at least believe that I can identify with the feelings in battle, the loss of friends and the tears that were shed. I also identify with your pain vis-à-vis the public discourse. I know that there are all kinds of good-for-nothings who scornfully call you a leftist and a traitor. I have nothing in common with them. They are not my brothers in arms, you are. Having said that, it should be mentioned that politically, you really are a leftist. A proud patriot—probably as much as I am—but a leftist, and this is the root of our argument. One binational state, you wrote to me, is the threat to the Zionist project. The Arabs will become a majority within a few decades. A binational state will be created from the Jordan River to the Mediterranean Sea. And you are not a leftist because you love Arabs but because you love Jews, as you explained. You want a clear Jewish majority, you are afraid of the two people living together. You dream of a Western, advanced state, in which not a single woman walks around with a Taliban dress. Neither Arab women nor Jewish women, as can be seen sometimes in Jaffa and in Beit Shemesh. A state which talks about high-tech, not about religious commands.

Climb 300 feet and look down at our map since the state’s establishment and you will notice a clear and gradual transformation by which Israel is becoming a binational state. I, on the other hand, observe a completely opposite trend. One of us is wrong, and I don’t have the privilege that you have of flying and looking from above. I only know how to swim, walk and read books.

Contrary to what you say, Israel is in the process of separating from the Palestinians. I am acknowledging this precisely as a person who opposed part of the moves. Your numbers are erroneous. Israel is separating from the Gaza Strip and from two million Palestinians who live there. The first person who tried to do so was Menachem Begin in the peace agreement with Egypt. My relatives, who used to live there, still talk about the preparations for the initial struggle against the prime minister, preparations which disappeared when the Egyptians refused to accept the Gaza Strip.

A decade before the disengagement, Israel separated from most Palestinians in Judea and Samaria when it created the Oslo Agreements and handed the Palestinian Authority 40 percent of the territory. That was also a process which sparked demonstrations and protests on the right, but in the end, all Israeli governments are maintaining the separation, transferring funds to the PA, and despite declarations here and there—it doesn’t look like anyone is planning to cancel this reality.

Security barrier next to Beit Jala (Photo: AFP)
I know that Oslo was described as “temporary agreements,” and that people like you believe a permanent agreement can be reached, but more than 20 years have passed since then and it appears to be convenient for everyone. Israel doesn’t have to deal with the educational system in Ramallah or in Nablus and doesn’t have to solve clan conflicts, yet is in fact in control of security.

From the pilot’s flight, you can see that contrary to the talk about a status quo or a binational state, Israel is separating itself from the Palestinians wherever it can. In Jerusalem - where you fear the rise of an Arab mayor - a wall was built which placed more than 100,000 Arabs outside the city. While they are still called Jerusalemites, they are surrounded by a wall and roadblocks and receive most services from the PA. Within a decade, I assume they will no longer be Israeli citizens either. Yes, we don’t talk about it, but with the absence of decisions – things are dictated by reality.

Forget about Naftali Bennett, who is sometimes in favor of separation based on the annexation of Areas C, and sometimes talks about annexing everything in an act of self-sacrifice (and no, that is not a jihadist term). Forget about Benjamin Netanyahu and the two states for two people. Forget about all politicians and look at the map. At the end of the day, we are returning to a limited Allon Plan and separating ourselves from the Palestinians wherever we can. Without the peace you talk about – because there is no one to make peace with – but with a strategic logic of the power of inertia. You are right, Israel’s governments don’t make decisions. They idle away. They neither build nor annex a single inch of land (against my opinion). But is this what a binational state looks like? Get used to the settlements. They are there. And to the Palestinians with the PA, which is already acting like an enemy state, with embassies around the world and a hostile Hamas state in Gaza. That’s what we have. It’s inconvenient, its imperfect, but it’s realistic. And by the way, when addressing reality rather than dreams, there little difference between us. You are wrong, we are intertwined. Two of the four species. Chag Sameach.