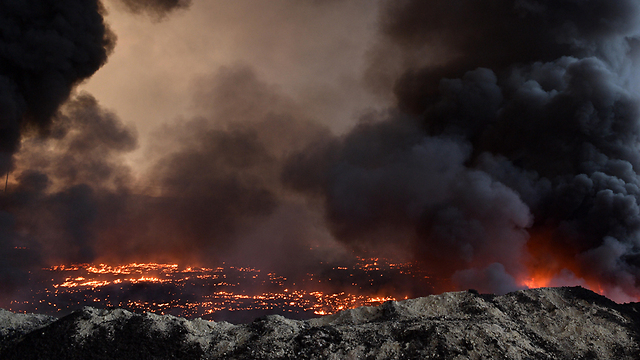 Showdown in Mosul: The world against ISIS

Iraqi and Kurdish forces are advancing on ISIS held Mosul with the help of close US led-coalition air support; meanwhile, ISIS has kidnapped 550 families to use as human shields, and is massacring civilians to pressure them into staying in Mosul.

Fighter jets, helicopters, special forces, thousands of soldiers, and smart bombs – all of these are being used to take over the city of Mosul from ISIS. Mosul is the second largest city in Iraq.

However, the Islamic extremists are still far from surrendering, and have taken 550 families hostage to be used as human shields. There are also reports that ISIS is carrying out mass in Mosul.

Iraqi intelligence said to CNN on Saturday that ISIS has killed 284 men and children ahead of the coalition’s advance on Mosul. The mass killings have apparently been going on over the past two days, and have been carried out both inside the city and on its outskirts. They are doing this to scare families into becoming human shields for the terror group.

The UN has expressed earlier that it is “very worried” after ISIS took 550 families from the villages surrounding Mosul to be used as human shields as the Iraqis and the Kurds approach Mosul.

German Tornado fighter jet (Photo: AFP)
Meanwhile, Mosul is being continuously bombed and shelled in preparation for what is expected to be the largest military campaign in Iraq since the US occupied the country in 2003 and took Saddam Hussein out of power. Iraqi forces have conquered 50 villages formerly held by ISIS since the operation began Monday, including a Christian village held since 2014. The advance is occurring as US Secretary of Defence Ashton Carter is in Iraq to visit Iraqi Prime Minister Haider al-Abadi. The two leaders will be directing the operation together.

The Iraqi military officially announced that it had entered the center of the Christian village of Karkush which is situated 20 kilometers from Mosul, and are cleaning out the village of any remaining ISIS fighters and IEDs. The village was depopulated when ISIS came and took it over two years ago.

Iraqi forces approaching Mosul (Photo: AFP)
Iraqi Special Forces captured the Christian village of Bartala earlier in the week, and is advancing on Mosul from the south-east. Meanwhile Kurdish Peshmerga fighters are advancing on the city from the north and the West.

Iraqi intelligence estimates that there are more than 5,000 Jihadist fighters waiting for them in Mosul.

“This is only the beginning of the campaign, but we feel confident in how things are going so far,” said a US official. Meanwhile, Sec. of Defense Carter announced that there is an understanding that Turkey will join the campaign against ISIS.

A Shia flag reads 'Ya Hussein' on an Iraqi tank (Photo: AFP)

The US is providing close air support to Iraqi and Peshmerga forces on the ground. US Apache helicopters, along with Eurofighter Typhoon and Tornado aircraft are taking part in airstrikes against ISIS forces along with A-10 Warthog close fire support aircraft. French Rafale fighterjets and reaper drones are also providing air support and eyes in the sky for the Kurds and Iraqi forces.

There are 5,000 US soldiers on the ground in Iraq so far, of which 100 are fighting with Peshmerga and Iraqi forces as advisers.

The first US casualty of the war occurred Thursday as the result of an IED.