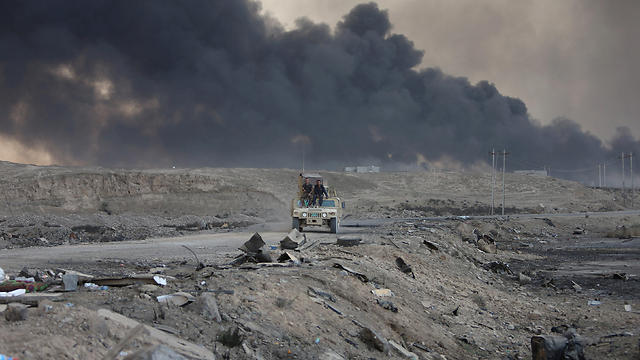 What IDF should learn from battle for Mosul

Analysis: The ISIS military modus operandi in Iraq, which consists of offensive tunnels, snipers and special forces designed to take over communities and hinder coalition aerial bombardments, will likely be emulated by Hezbollah and Hamas during their next conflict with Israel.

The battle for Mosul has just begun, but it is already possible to discern that the Islamic State’s (ISIS) fighting methods are very similar— sometimes even identical—to the fighting methods that Hezbollah and Hamas plan to use in the next conflict with Israel. The comparison between the way ISIS is now fighting the forces attacking it and Hamas and Hezbollah’s future fighting methods is based on declarations made by leaders, public reports of those leaders and their preparation activities on the ground.

Fighting in the Mosul area, last week (Photo: Reuters)
The ISIS fighting in Mosul can be described as “defensive guerilla” or “urban guerilla” strategy. Most of the fighting is taking place in constructed areas where the defenders, who are familiar with the area and prepared for fighting, have an advantage, even if the number of fighters he has is very small. In this context, it is important to mention that the 8,000 ISIS fighters in Mosul and the surrounding villages are being faced by an offensive force made up of elite units comprising the Iraqi army, the Kurdish Peshmerga militia which has recently been armed and trained by the Americans and the Turks, and mixed Shiite and Sunni militias that are fighting alongside the Iraqi government. In total, this brings the number of fighters facing ISIS to some 35,000 fighters. The numerical ratio of 1:4 in favor of the attackers does not necessarily guarantee victory, but it does provide them with a significant advantage. In the Israeli context, that will likely be the numerical ratio between the IDF and Hezbollah in a future war in Lebanon and Syria, and in another round of fighting against Hamas in Gaza as well.

Photo: Reuters
The ISIS activity is divided into “delaying fighting” in the open rural area outside Mosul and preparations for the fighting itself within the city. In both arenas, ISIS is using civilians as a human shield, mainly due to its ability to assimilate into the civil population, to emerge suddenly and to retreat back into hiding among the population. This method of action allows ISIS to escape the US-led aerial coalition’s bombings. This is exactly what both Hamas and Hezbollah have done and continue to do. They also “disappear” and fade into the civil population, disappear into the tunnels immediately after attacking, in order to avoid the wrath of the IDF’s aerial and artillery fire. ISIS, like Hezbollah and Hamas, seeks to appear for short periods of time allowing it to deal blows to the attacking force before disappearing from one sphere only to reappear in another. The “delaying fighting” is taking place by way of two channels. The first channel is a surprise attack launched by ISIS fighters, likely activists in sleeper cells that have assimilated into the population and attack outside the arena of the battle for Mosul. Their goal is to force the Iraqis and Kurds to divert forces into their realm, essentially diluting the forces attacking the city. Such an attack was carried out over the weekend in the city of Kirkuk—a city which is important both to the Iraqi government and army because of the oil wells surrounding it, and to the Kurds who claim sovereignty over the city. While the city is located more than 150 kilometers (93 miles) from Mosul, attacking it serves the Mosul defense very well. The attack in Kirkuk therefore, was meticulously planned. ISIS sent car bombs and snipers there in small cells, which fired on the Iraqi and Kurdish security forces and then entered the buildings, climbed on the roofs and went on sniping from there.

In addition, the ISIS militants set fire to several oil wells and a sulfur plant in order to cover the sky with clouds of thick smoke which would disrupt the American UAVs’ activity. These UAVs collect information, but also target ISIS leaders and activists with firing missiles.

The coalition’s air forces, which provide air cover to the Iraqi and Kurdish ground forces, can only launch guided and accurate munition towards targets that have been located in advance.

The second component in the “delaying fighting” involves planting improvised roadside charges and mines on the main traffic routes and detonating car bombs on the armored vehicles advancing towards Mosul. ISIS is also hitting strategic targets, such as an energy-production plant with a significant number of Iranian workers. Moreover, it is using the opportunity to harm Iran, which it sees as its number one enemy in the Middle East.

What can the IDF learn?

In the next war Israel can expect Hezbollah and Hamas to try to delay or disrupt a ground offensive move by the IDF through a surprise attack on Israeli communities. They may also try to take hostages in order to impede the advancing Israeli attack, as ISIS did in the town of Bartella, which is located about 20 kilometers from Mosul, and in other villages in that area.

Hezbollah Secretary-General Hassan Nasrallah has stated several times in recent speeches that Hezbollah plans to infiltrate the Galilee and take over Israeli communities near the fence and several kilometers from the Lebanon border, in a bid to delay the IDF’s armored forces which will be moving towards soldiers’ assembly areas or into Lebanese territory.

Photo: AP
Hezbollah will likely also try to plant explosive devices on the travel routes of the IDF’s armored force, which will enter in order to take over the missile and rocket launching areas. Hezbollah will endeavor to delay the force with the explosive devices and mines used by the IDF, but mainly through attempts of the terror movement's special force (Radwan Force) to gain control of civilian communities and take hostages. Since Hezbollah has no oil wells to which it can set fire in an effort to cover the sky with black pall of smoke, thereby neutralizing the Israeli UAVs and aerial observation posts, it is reasonable to assume that Hezbollah is planning to emulate that which was done in Kosovo: namely to burn other smoke-creating substances to produce the same effect.

Hamas will employ slightly different methods, but it is important to stress that the digging of offensive tunnels into Israeli territory is aimed, among other things, at allowing the Hamas’ special force to gain control of a community and take hostages, and mainly to harm the home front of the IDF forces moving into the Gaza Strip.

However, the purpose of the tunnels, also employed by ISIS, is not solely to infiltrate the area held by the enemy, but to serve as a hiding place against airstrikes in a way which will allow ISIS to fight and quickly transfer its fighters and weapons from place to place.

This is what is waiting for ISIS in the battle for Mosul (Photo: AFP)
That is precisely the goal of the fighting tunnels Hamas dug inside Gaza and the underground hiding places Hezbollah is digging in the towns and villages of southern Lebanon. In these tunnels, they are stocking up on food, water and ammunition in order to enable an extended fight under the constructed area and allow the fighters to rest between one conflict and another. In this context, the ISIS tactic which was pre-prepared in Mosul and its surroundings is no different from what Hamas is preparing, and likely Hezbollah as well. The underground fortifications are mostly for survival purposes rather than for an attack. It should be noted that ISIS has likely prepared offensive tunnels in Mosul as well, which contain large explosive devices that it will detonate in order to block the forces moving on Mosul’s main street. Hamas is using the same method.

Photo: Reuters
Dealing with the tunnels will, therefore, require a strong effort both from the attacking forces in Mosul and from the IDF, if it is forced to fight in Gaza or in southern Lebanon. There will be a need to neutralize both the offensive tunnels entering Israeli territory, but at the same time to be able to deal efficiently with the underground tunnels and deactivate a significant number of them in Gaza and southern Lebanon, which have been dug—like in Mosul—in order to allow relatively small forces to engage in “urban guerilla” fighting for a prolonged period of time.

The planned fighting inside Mosul is also very similar to what Hezbollah and Hamas are planning: to use the tunnel system in order to appear in unexpected places, to appear on a rooftop and begin sniping. But there is a key difference: when fighting inside the cities, Hezbollah and Hamas will likely not leave many explosive devices behind them to target the IDF, so as not to harm the population living in the area.

The forces are headed to Mosul and have already occupied several towns (Photo: AFP)
Another difference is that both Hezbollah and Hamas have a large number of anti-tank missiles at their disposal which can delay the advancement of an armored forces, while ISIS in Mosul only has few weapons which can harm an armored vehicle from a range of several kilometers. The ISIS fighters carry RPG rockets, which are capable of hitting an armored vehicle from a few hundred meters away and are very difficult to operate in an open area. In the urban area, the RPG in the possession of both Hezbollah and Hamas is a big advantage.

The similarity between the fighting methods used by ISIS and the methods that Hezbollah—and to some extent Hamas as well—plans to use against Israel require the IDF to strictly monitor the fighting methods of the Iraqi and Kurdish fighters and the American aerial forces striking in Mosul. If the lessons taken from in Mosul will be learned by the IDF and thoroughly examined in order to adapt them to our conditions, they may help the IDF deal with the next battles in Lebanon and Gaza while incurring less damage.

We must remember, however, that the ISIS strategy is different from the Hezbollah and Hamas strategy, which is based on wearing out the Israeli home front, mainly by firing rockets and through other means. ISIS is waging a suicide war in order to preserve an idea and mainly produce a public awareness victory, which will allow it to continue waging a war of terror as part of a global jihad.