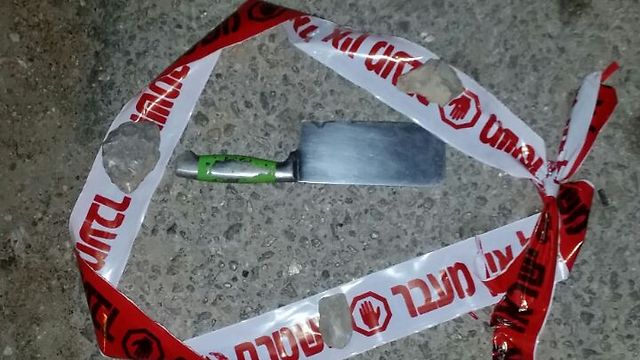 A terrorist attempted to run over soldiers at a checkpoint near Ofra prompting soldiers to open fire at the vehicle; terrorist exited vehicle and attempted to stab soldiers with a cleaver before being shot.

A terrorist attempted to run over and stab soldiers near a checkpoint in the settlement of Ofra near Ramallah early Saturday morning. No IDF forces were injured in the attack.

Following the attempted vehicular assault, soldiers opened fire at the terrorist's vehicle, prompting him to exit the vehicle with a knife and attempt to stab the soldiers. IDF forces opened fire severely wounding the terrorist. The terrorist, 30, was evacuated to Hadassah Medical Center in Mt. Scopus.

Soldiers from the Kfir Brigade, who are responsible for the sector, set up the checkpoint in response to an attempted attack that occurred Friday in which a terrorist opened fire in the direction of Ofra causing no damage and wounding no one. Security forces found shell casings and the IDF and Shin Bet are investigating if there is a connection between the two attacks.

The two attacks come during a particularly eventful weekend which saw two other attempted attacks thwarted by security forces.

A 23 year-old Palestinian from Hebron was arrested following the discovery of a knife after a body search was conducted. Border Police became suspicious of the man's behavior and conducted the search after the man refused to stop. Following his arrest and questioning, it was revealed that he planned to carry out a stabbing attack at the Cave of the Patriarchs.

In addition to the attempted attack in Hebron, two eight year-old Palestinian children from Beit Fajjar carrying knives were detained by IDF forces by the border fence near the settlement of Migdal Oz in Gush Etzion. During questioning, the children said an adult man gave them the knives and told them to carry out an attack. They were transferred to Palestinian police.