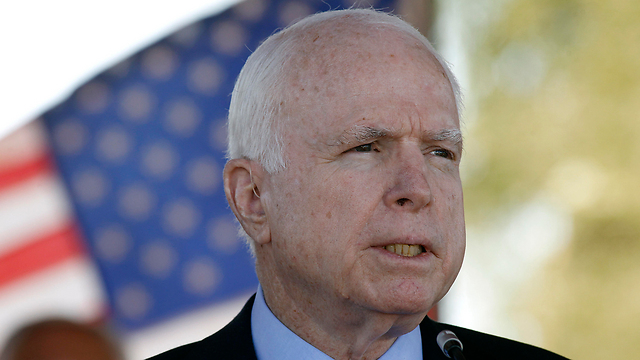 Arizona Senator John McCain has voiced his support of President-elect Donald Trump's criticism of the high cost of the F-35 program; previously calling the program 'a scandal and a tragedy,' McCain said that while Trump will not be able to abruptly discontinue it after taking office, he will be able to gradually reduce its funding if he so chooses.

Senate Armed Services Committee Chairperson John McCain backed President-elect Donald Trump's criticism of the cost of the F-35 fighter jet from Lockheed Martin on Monday. Back in April, McCain commented on the F-35's cost, schedule and performance , all of which he said has been "a scandal and a tragedy." The chairperson of the Senate Armed Services Committee told senior Pentagon officials Tuesday during a withering critique of the most expensive weapons program in US military history.

John McCain (Photo: AP)
McCain stated during an oversight hearing held by the committee that the aircraft's development schedule has stretched to 15 years, deliveries of the F-35 have been delayed, and costs have skyrocketed. "It's been a scandal and the cost overruns have been disgraceful," McCain said. "And it's a textbook example of why this Committee has placed such a high priority on reforming the broken defense acquisition system." The Pentagon has stated that it plans to spend close to $400 billion to buy nearly 2,500 F-35s for the Air Force, Navy and Marine Corps. The budget request for fiscal year 2017 includes $8.3 billion to purchase 63 aircraft. The F-35, which is being designed to meet the specific requirements of each of the services, cost over $100 million each. Bogdan said he anticipates reducing the per-unit cost of the Air Force's version to under $85 million by 2019. That said, McCain also stated that Trump will not have the authority to cancel the F-35 program, since funds have already been appropriated for it. He can, however, gradually "reduce buy" the F-35 jets over time.