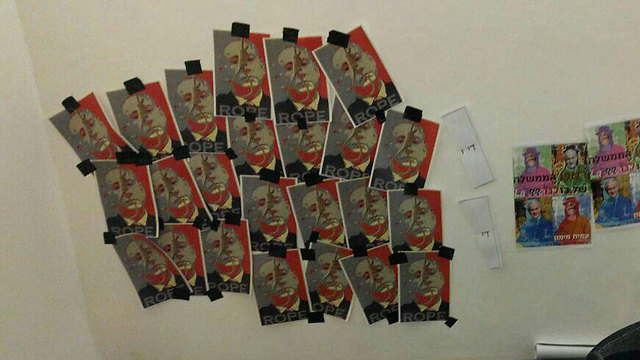 Art students in Jerusalem protest what they consider to be an infringement on their freedom of expression; unknown artist at Shenkar College hangs work of PM with Hitler mustache.

Students at the Bezalel Academy of Arts and Design in Jerusalem again protested and didn't attend classes for two hours Thursday afternoon to protest what they consider damage to freedom of expression following the criminal investigation of a peer who created a poster that depicts Prime Minister Benjamin Netanyahu with a noose in front of him. In addition, additional copies of the poster in question were hung in the institution.

Nadav Heipert, the chairman of Bezalel's students' union, said, "A red line has been crossed here," referring to the questioning of the student who was questioned under caution by the police for her poster and the condemnation from politicians who have deemed her work to be incitement to violence.

(Photo: Barel Efraim)
In the arts department at Ramat Gan's Shenkar College of Engineering and Design, a piece was hung depicting Netanyahu with a Hitler mustache and the word 'incitement.' Shenkar's administration said that it did not know who had put up the piece and have since removed it. Students at the college held a demonstration that blocked Illit Junction in the city in protest of the goings-on at Bezalel.

Shenkar's contribution
"The administration understands the students' rage and their need to demonstrate," the institution commented. As Wednesday morning dawned on the academy, a new controversial poster of the prime minister was revealed. This time, it was Netanyahu's naked image that beckoned passersby, with a crown on his head and a noose superimposed around his member. Scrawled beneath the noose was the question, "It this better, Attorney General?" Over 100 Bezalel lecturers sent a letter to the attorney general calling him to cancel his call for criminal proceedings against the student artist.

The original poster
That student was questioned under caution by the police for a quarter hour on Tuesday and released without any restraining conditions. Her lawyer explained then, "It was meant to convey how Bibi is strangling the hope for peace. The picture was taken out of context."