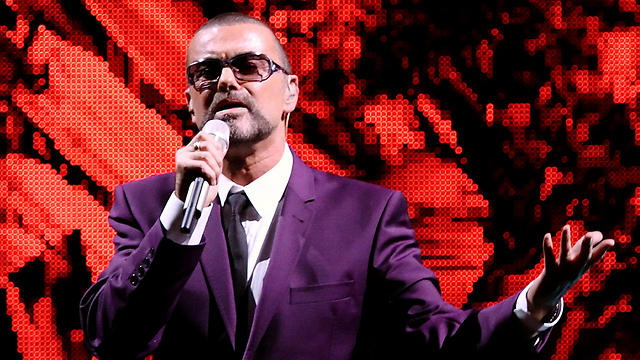 His music touched the souls of fans the world over, but after his death, it is George Michael's quiet charity work that shines a light on his modest spirit; 'Your songs have always greatly inspired me,' Israeli singer Eyal Golan writes in his eulogy, promising that they 'will continue to be the soundtrack to my life.'

After it was announced late Sunday that singer and gay icon George Michael died, grieving fans mourned his passing; among them were many celebrities who were inspired by his music, including Israeli singer Eyal Golan, who wrote an op-ed on his passing. In addition, British charities revealed that the pop star had secretly been a major behind-the-scenes donor who gave his time and money to support cherished causes.

"Whenever I was asked what my professional dream is, I would say that my biggest dream is to perform with international singer and lyricist George Michael, at one of his international concerts," wrote Golan. "Sadly for me, that dream will not be coming true."

"Your songs have always greatly inspired me," Golan admitted. "No one can ignore your incredible vocal abilities or the unique color of your voice. From time to time, you reinvented yourself with varied and special musical directions and images. You were a musical legend, a real classic. You had an extraordinary, amazing and delightful voice, which I loved so much.

"I admired you even as a young man," continued Golan. "I was happy for your phenomenal success in the global music industry when you were just starting out as a member in the 80s duo Wham!" Golan said that "I danced my first slow dance to one of your songs, and you even inspired my first earring. You were always my role model."

"It's extremely sad that your song Last Christmas reverberates on the day of your death in such an ironic and unfortunate way with the Christmas holiday. But I will always continue to listen to you and sing your songs. They are and will continue to be the soundtrack to my life and part of what inspires me," Golan wrote, as an endnote to his eulogy.

Beatle Paul McCartney posted a statement on his website praising Michael's "sweet soul music," which he said will live on.

"Having worked with him on a number of occasions, his great talent always shone through and his self-deprecating sense of humor made the experience even more pleasurable," McCartney said, posting a picture of the two of them together.

The man wwho earned a reputation for self-indulgence had actually given millions of pounds to charities involved with helping children, cancer victims and AIDS sufferers.

He was also remembered for small acts of kindness, such as helping his village in north London get a Christmas tree and volunteering at a homeless shelter.

Many paid tribute to Michael on Facebook and Twitter and others cited years of good works that received little publicity, largely because Michael insisted on keeping his charity work out of the limelight. Fans placed flowers and other tributes at his homes in north London and in Goring, England, where he died of apparent heart failure.

Michael (L) with music partner Andrew Ridgeley during their time as the dyamic duo Wham!
Michael's later years were marked by occasional brushes with the law and a series of driving incidents related to substance abuse, but this was overlooked Monday as directors of major charities and advocacy groups stepped forward to praise him. Among the groups he supported were the Terrence Higgins Trust, which helps people with AIDS, Macmillan Cancer Support, and Childline, which offers confidential phone counseling for young people. Childline founder Esther Rantzen said Michael gave royalties from his 1996 hit "Jesus To A Child" to the charity along with many other donations. "Over the years he gave us millions and we were planning next year, as part of our 30th anniversary celebrations to create, we hoped, a big concert in tribute to him—to his artistry, to his wonderful musicality but also to thank him for the hundreds of thousands of children he helped," she said. She said Michael was determined that no one outside the charity should know "how much he gave to the nation's most vulnerable children." Jane Barron from the Terrence Higgins Trust—which focuses on AIDS and sexual health-related work—said Michael made many donations and gifts, including the royalties of his "Don't Let the Sun Go Down on Me" duet with Elton John in 1991.

Michael had spoken publicly about the pain of losing a partner to AIDS early in the epidemic, but he kept his long history of donations to the Trust private. Rights activist Peter Tatchell, who knew Michael before he achieved fame, said Michael had hidden his homosexuality in the early part of his career because gay public figures were subjected to vicious treatment by the British tabloid press. He praised the singer for making his sexual orientation known after he was arrested in 1998 for lewd behavior in a public toilet in Los Angeles.

Tatchell said Michael's response to his arrest amounted to "a defiant defense of the right to be gay" that had an impact throughout the gay community.