Umm al-Hiran evacuation. An example of the ills of governmental disregard
Photo: AFP 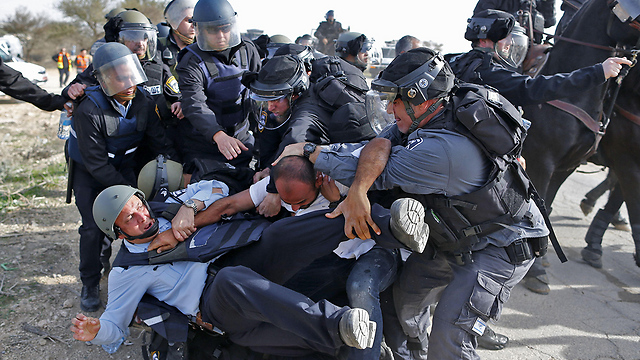 Op-ed: Wherever the evacuation of families can be prevented, it should be done. Such an attempt was made in Umm al-Hiran. Amona will eventually be evacuated because that’s what the court ruled, and Umm al-Hiran had to be evacuated too. The same applies to every place the State of Israel claims to have sovereignty over.

I have been dealing with the Bedouin community in the Negev for several years now. I see it as the embodiment of governmental weakness: Two thousand illegal buildings constructed in one year; agricultural crimes; polygamy; protection money; property and traffic offenses; lack of education and infrastructure; and mainly the victory of nationalistic forces over the supporters of Israelization. Sheikh Raed Salah’s northern branch, with the teachers and the budgets sent to the Bedouin community on a daily basis, is defeating the moderate forces, and the State of Israel standing behind them.

Last week’s violent evacuation of Umm al-Hiran. The government’s helplessness in light of the chaos in the Negev has turned the Bedouins into a pawn in the hands of Arab nationalists (Photo: AFP)
Whoever wants to learn about the ills of governmental disregard can take the Bedouins in the Negev as an important lesson. The years after the state’s establishment were promising: The community members’ enlistment with the IDF, their integration into the labor market, the tourism, etc. But from there, it only deteriorated. Unlike the Bedouins in the north, discharged soldiers were boycotted by the Islamic movements that took over local politics, and the state failed to intervene. It did not intervene even when crime beganto expand or when the Negev turned into the wild south. Today, there are hardly any Bedouin soldiers in the Negev and hardly any trace of the State of Israel within the Bedouin community. Umm al-Hiran is just one example. Here is the chain of events: The affair began in 1956, when members of the Abu al-Qiyan tribe were willingly relocated to the Beit Kama area on land leased for agriculture. Ten years later, the tribe spread to additional lands beyond the allotted territory, including lands that were later designated for the community of Hiran (as part of a government decision from 2011 to establish 10 communities in the northern Negev). In the 1980s, the government suggested that the Bedouin community members move to permanent communities with infrastructures and nearly full subsidization of the lands—half a dunam for each Bedouin man from the community, way beyond what Jews in the area are entitled to. Tribe members were offered lands in the town of Hura, and the majority indeed moved there. The remaining minority petitioned the court. After countless discussions and petitions, the court ruled that “the petitioners have no ownership over the land and their settlement in the area is only temporary.” In January 2016, Justice Miriam Naor ruled that the case was conclusive and that the court was unable to discuss the issue. Last week, an evacutin was carried out. The only question that needs to be asked is whether Israel is a law-abiding state which implements court rulings. My answer is yes, without any “buts.” I am in favor of regulation, including of the homes in Amona and Ofra. Wherever the evacuation of families can be prevented, it should be done. Such an attempt was made in Umm al-Hiran too. As soon as it failed, the court ruling had to be obeyed. Amona will eventually be evacuated because that’s what the court ruled, and Umm al-Hiran had to be evacuated too. The same applies to any other place in the country over which we claim to have sovereignty, whether it involves Haredim who built an illegal yeshiva, Bedouins or my little sister somewhere in Samaria. We can reach understandings, argue and protest, but at the end of the day the state must implement its decisions, and if anyone—regardless of their religious, race or gender—raises their hand on police officers and soldiers, they must pay a price.

The first of the two greatest tragedies in this story are the Bedouins, who as part of the government’s helplessness in light of the chaos in the Negev have become a pawn in the hands of Arab nationalists and organizations like Adalah and Rabbis for Human Rights. The campaigns they have waged while being funed by foreign governments have turned the court ruling into a Nakba, racism and ethnic cleansing and helped inflame the situation.

The second tragedy here is the Jews’ statehood. The inability to look forward to the long run. Right and duties. Coexistence. The inability to accept the rule of law as a world view, not just when it's politically convenient.