Netanyahu and Trump. One doesn’t know, the other can’t
Photo: EPA, AFP 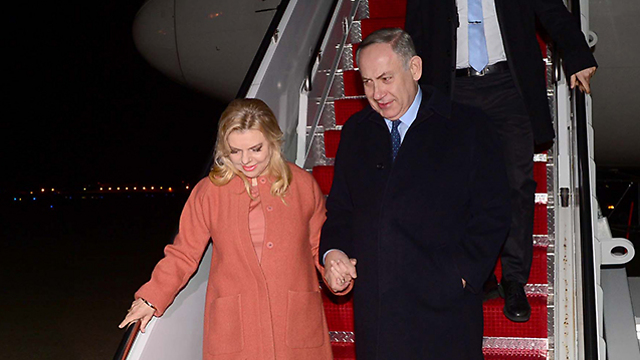 Trump-Netanyahu meeting will end with no final product

Op-ed: There will be a lot of goodwill in Wednesday’s Washington meeting, but direction will remain vague; The US president doesn’t have a coherent policy, and the Israeli prime minister is not getting the support he needs from the Right to place a baked product on the White House table.

For generations, America was an anchor of economic and political stability for Israel. The disputes and the disagreements all stemmed from the fact that the United States had a coherent policy and we didn’t.

It allowed Israel to play for, and waste time, with the US setting the tone in the end for agreements or quarrels. But the world has changed: The Trump administration’s policy is not formed, and not just regarding Middle Eastern affairs.

Netanyahu arrives in Washington. The main problem is that the Right itself has gotten used to placing half-baked ideas on the table (Photo: Avi Ohayon, GPO)
There will be a lot of goodwill in the Trump-Netanyahu meeting, but very few clear directions. All the parts and pieces are on the table, but the final product is unclear. With Donald Trump it’s unclear because he doesn’t know; with Benjamin Netanyahu it’s unclear because he can’t know.

On Sunday evening, while the Likud was celebrating Knesset Member Oren Hazan’s wedding, a Women in Green conference was held in Jerusalem on the issue of applying Israeli sovereignty to Judea and Samaria.

The music was different, the audience was different, and only a few politicians who arrived from one event and headed to the other created a link between the two celebrations.

MK Hazan is a likeable person despite all the stories about him. There are many positive aspects in a person who turns life into a joke and puts the unfathomable seriousness with which empty declarations are made into the right proportions.

Many times, his tendency to say that “the emperor has no clothes” provides a comic relief, and that’s important. He should be congratulated: We should wish him a happy life, and mainly that he keeps making people laugh and being at the center of attention.

On the other hand, this should take place outside Israel’s Knesset. There are common citizens left here and there, like myself, who still see politics as a business for serious people who serve as role models.

The support for Hazan is in accordance with his political power (and he has political power) rather than with his competence. Politics is the art of compromise. When you don’t know that you’re compromising, a deeper problem begins. In the case of the Trump-Netanyahu meeting, it’s unclear where the compromise is, because the demand is unclear. The idea of applying Israeli law to Judea and Samaria is the only message coming out of Israeli ministers today. After many years of believing in the false concept of a status quo, the public opinion in the Israeli Right has changed. It stems from public relations, from Netanyahu’s contradicting statements, from the dominance of movements like Women in Green.

Not every idea talks about full annexation: From Bezalel Smotrich’s Ma’ale Adumim to Pinchas Wallerstein’s Givat Ze’ev, through Yisrael Katz and Yoav Kish’s annexation of the Jerusalem vicinity (Gush Etzion and Beitar Illit all the way to Ma’ale Adumim), to the annexation of the settlement blocs and the Jordan Valley or a general statement about Area C from Naftali Bennett.

These are all allegedly reasonable ideas, which match the Right’s approach, but they have no chance of being accepted as long as they are intended for conferences and declarations and as long as Netanyahu keeps supporting and opposing at the same time.

The main problem is that the Right itself has gotten used to placing half-baked ideas on the table. Annexation on the one hand without fully discussing the future of the Palestinians. Leaving things open, like Trump does.

Sunday’s cabinet meeting, which dealt with the issue and was defined as a good meeting by the prime minister’s bureau, is a concrete example of that. The most fundamental battle between Bennett and Netanyahu was around the semantics. The former talks about an expanded autonomy for the Palestinians—an autonomy on steroids—while the latter talks about a demilitarized state.

If they are both referring to the same area (based on today’s PA territories), there is no difference between them. The thing is that they have no idea: The principles and the interpretation of slogans were not intentionally put on the table. Full Israeli military control? A Palestinian policing force, cooperation, planning the territorial sequence? The Puerto Rican model? The Yigal Allon model with the Jordanians?

Without dealing with these issues, without a clear definition of Palestinians, it is unfortunately likely that sovereignty won’t even be applied to a grain of sand. Netanyahu, who is receiving personal backing from the Right, is not getting the support he needs to place a complete product on the White House table. He is alone versus Trump. He allegedly has all the ingredients, but there is no chance that this meeting will produce a cake that will satisfy the taste buds of right-wing voters.