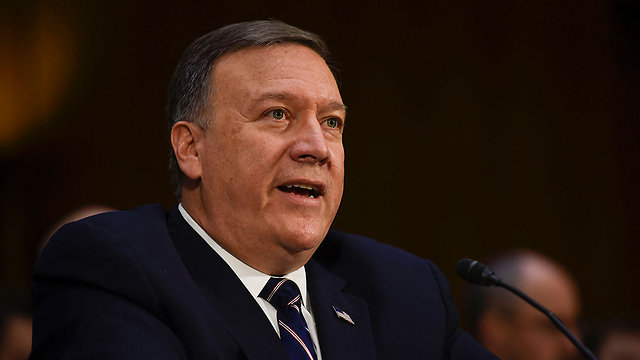 Mike Pompeo meets with Palestinian officials, including President Abbas and security chief Majed Faraj to discuss diplomatic matters; talks mark successful bid to establish a back channel with the new administration, amid fears that Palestinians are falling behind in the diplomatic race for Trump’s heart, particularly given his repeated statements that it lies with Israel.

The director of the US Central Intelligence Agency (CIA), Mike Pompeo, met with Palestinian President Mahmoud Abbas on Wednesday, Palestinian officials told Ynet, confirming a report from the Palestinian news agency Ma'an. Palestinian security chief Majed Faraj was also present at the meeting which, according to the officials, was positive and serious and touched upon diplomatic matters.

Pompeo was on a visit to the region last week, arriving at Saudi Arabia and Turkey among others.

While the meeting marks the first of its kind between an American official and Abbas since the Trump administration entered the White House in January, according to one Palestinian security official who spoke to Ynet, this is actually the second time that Pompeo has visited Ramallah since occupying the top intelligence post.

Throughout recent weeks, the Palestinians have been approaching every avenue through which to establish a back channel with the new US government in order to begin any kind dialogue, amid fears that they were falling behind in the diplomatic race for Trump’s heart, particularly given his repeated statements that it lies with Israel.

Palestinians have also sought to open the lines of communication ever since Trump expressed his intention to move the US embassy from Tel Aviv to Jerusalem, a powerful symbolic move that would potentially torpedo Palestinian stated claims to at least the eastern half of the city.

During his visit to Turkey and Saudi Arabia, Pompeo dealt primarily with ways to counter the growing threat of ISIS and how to restore stability to Syria, devastated by the ongoing civil war.

Pompeo is considered a friend of Israel’s and was among the most outspoken critics of the Iranian nuclear deal pieced together by the Obama administration—a position which kindled warmer predispositions toward the Netanyahu government.

Indeed, much like Prime Minister Benjamin Netanyahu, Pompeo claimed in the past that the deal would not prevent Iran from acquiring the bomb and would place Israel in greater danger.

Additionally, Pompeo fiercely objected to the the removal of sanctions from Iran, unequivocally dismissing the notion that it would moderate the aggressive regime as a "joke. They want to annihilate Israel, now buying Russian missiles," he said.

He also lashed out at Obama for failing to make the deal conditional upon Iranian agreement to stop its calls for Israel’s destruction.

Prior to being confirmed as the CIA director, Pompeo Tweeted that “I look forward to rolling back this disastrous deal with the world’s largest state sponsor of terrorism.”

Pompeo also made extremely flattering comments about Prime Minister Netanyahu himself back in 2015 during a visit to Israel, describing him as “a true partner of the American people,"