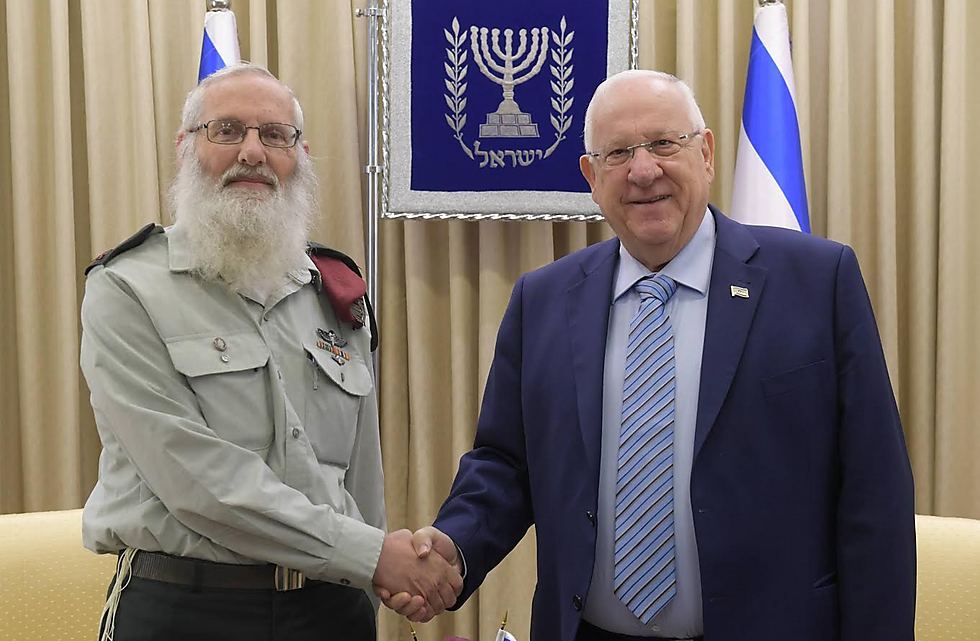 Col. Eyal Karim pledges his loyalty at the President's Residence, thereby joining the Chief Rabbinate Council, which is in charge of contemporary halachic questions; Karim's nomination to IDF chief rabbi was marred by past comments he made permitting the rape of women in times of war, attributing illness to gays and advocating for refusing commander's orders.

The new IDF Chief Rabbi, Col. Eyal Karim, declared his allegiance at the President's Residence on Sunday, thus joining the Chief Rabbinate Council, which examines Jewish law and modern-day halachic decrees.  His appointment was announced in July and was immediately met with criticism over comments he made permitting the raping of women during times of war, describing gay people as “sick or deformed," and calling for soldiers to disobey military orders that conflict with Jewish law.

In November, the High Court of Justice issued a tempotary injunction delaying Karim's appointment, demanding that he clarify his past remarks.

The court eventually accepted his explanations and shelved a petition filed by Meretz seeking to block the appointment. Karim then assumed the post of IDF chief rabbi in early December.

Karim
"In Israel, there's a freedom of speech," Karim said during the ceremony at the President's Residence. "The problem is that only few are willing to hear and listen.

Karim (C) receiving his new rank from IDF Chief of Staff Gadi Eizenkot (R)
"As I join the Chief Rabbinate Council as a member, I wish that we all be wise enough to know not just how to talk, but also how to listen, understand, and learn so we can fix what needs to be fixed," he went on to say.

President Reuven Rivlin told the new IDF chief rabbi that his job is "the mission of your life—to serve as a link between the Torah and the army; between the places of Torah study and the training bases; between the desire in the IDF and among many in the Israeli society to integrate as many different sectors in the military in an appropriate manner."

Following the ceremony, Rivlin said that "The job of unification is no less complicated than that of Moses. This is because Moses didn't have to contend with the IDF chief of staff, the government, chief rabbis and the heads of yeshivas and counselors. Nor did he have the media waiting to shine a light on every chasm and crevice."

On the other hand, stressed Rivlin, "Moses also didn't have the IDF chief of staff on his side, or the chief rabbis for any problem, the heads of yeshivas and counselors to ask for advice and the media to communicate messages of true dialogue and a desire to listen to each and every soldier, male of female. You have all of these tools."