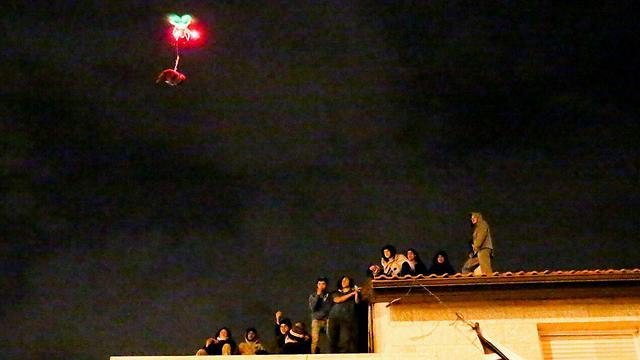 Protestors dig in during Ofra's evacuation

Hundreds of protestors are still barricaded in the last house to be demolished; two protestors have been arrested, 11 officers lightly injured and 17 teens injured, two of whom were taken to the hospital; as the evacuation simmers down, police decides to let the youth come down from the roof on their own.

Hundreds of protestors, mainly young people, congregated in the nine homes in Ofra that are slated for evacuation due to being built on Palestinian land. In order to deal with demonstrators, 1,500 police were dispatched to the scene. As the evacuation simmered down, it was decided to leave the remaining youth barricaded on the roof of the last house alone for the time being.

Police started clearing the area, letting the teens come down on their own, stating that if the youth refused to evacuate overnight, they would be handled in the morning.

One of the protesters dropped a number of sleeping bags for the remaining youth using a drone. He was soon captured and taken away.

The deputy commander of the Judea and Samaria Division of the Israel Police came to the junction where the nine homes are built and officially pronounced the evacuation order. Police then began physically evacuating people, and demolition will begin Wednesday.

A total of eleven police officers have been injured thus far, with one being struck in the head and two being bitten.

Police removing a protestor from one of the homes (Photo: Reuters)

Following failed attempts to talk the youth out of the house, forces busted the windows and doors open and started pulling the barricaders out. The demolishing of an abandoned house commenced.

Several dozen Haifa residents were demonstrating earlier Tuesday against the evacuation, holding signs stating "we are all settlers" and calling on"Bibi to wake up."

In contrast to Amona, however, the initial stages of the eviction process proceeded mainly without incident. Crying teenage girls allowed themselves to be led by security forces out of the condemned homes after Ofra Chief Rabbi Avi Gisser and Samaria Regional Council Head Avi Roeh spoke to protesters, promising that the settlement movement would “continue building the Land of Israel” and pledging to expand the borders of Ofra following the coming demolition.

Esther Brot, one of the residents of the nine homes and the owner of the first one slated for evacuation, said, "Even if I thought I would be ready for this, I'm really not. This is a hard moment."

Ofra residents and demonstrators are especially testy given the recent evacuation of Amona. Additionally, residents say police "tricked" them, claiming that police gave them permission to take children to school before they would enter the area. However, Border Police and Israel Police forces entered at 5:30am and isolated the nine homes.

Demonstrations in Jerusalem saw dozens of youths in the Katmon neighborhood protesting and burning tires. Five such youths were lightly injured by police who intervened when they were wheeling a cart of tires, ostensibly to burn them.

The High Court originally ruled that the nine homes were to be evacuated by March 8th.