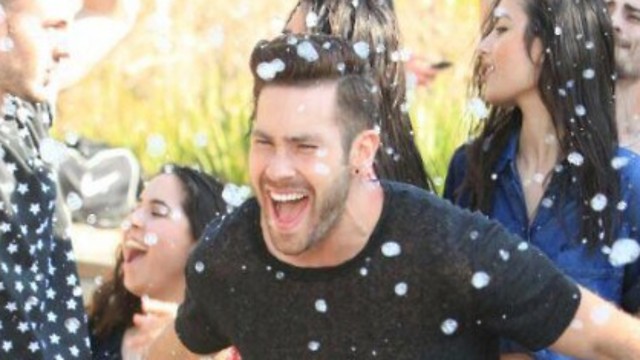 Singing his heart out: Imri Ziv filming his Eurovision clip

After scoring the coveted winning ticket into one of the most glamorous stages in Europe, the reality show star is already planning the trip and filming the video clip, which will represent Israel in the Eurovision Song Contest.

This coming Thursday, the song and video clip of Israel's representative in the Eurovision Song Contest will finally be revealed.

The competition is set to be held in May, in the Ukranian capital of Kiev.

Imri Ziv, the big winner of the reality show the Next Star, will try to keep up with tradition and qualify for the finals and possibly even score the coveted award.

Imri Ziv (Photo: Moti Lavton)
Upon discovering that Ziv was filming the clip in very close proximity to Pnai Plus's offices, the writer decided to join the crew and watch the filming from up close.

On Sunday, the filming crew took temporary residence at Tel Aviv's Sarona Market complex along with several dozen extras and a foam machine, in an attempt to make a memorable video that would capture Europe's heart.

The song, which will be performed by Ziv, is titled I Feel Alive.