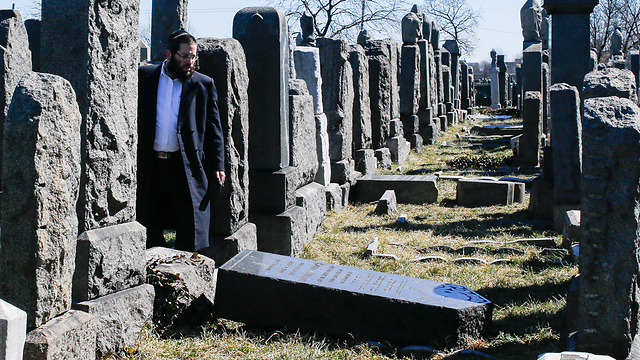 Israel to assist in US struggle against anti-Semitism

The Israeli government is examining several options to help counter the wave of anti-Semitism in the US; MK Michael Oren: ‘The Jewish leaders asked for our help, especially in the fields of cyber and security.’

Following the wave of anti-Semitic incidents in the US over the past few months, the Israeli government is mulling over possibilities on how to assist the Jewish communities.

“The US Jewish community leaders are very concerned about the rise in anti-Semitism and disappointed that Israel has failed to express enough understanding, sympathy and support of their situation, said Michael Oren, a Deputy Minister in the prime minister’s office.

According to Oren, during President Barack Obama’s term, there was anti-Semitism in the US but mainly from the Left and from BDS, who are gradually making their presence increasingly conspicuous on university campuses.

Now, the new pattern of anti-Semitism is coming from the right, which includes desecration of cemeteries, threatening calls to Jewish centers, drawing of swastikas and other affronts to Jews.

"Israel needs to find ways to help," Oren urged. “To date, we have dedicated resources to combat BDS but now we have to help the Jewish communities in dealing with anti-Semitic attacks from the right. Overall, I am very pleased with what President Donald Trump has done in response to the wave of anti-Semitism, and his efforts to thwart it. The directive issued by the government to fight anti-Semitism is unequivocal."

Oren is mainly referring to the efforts undertaken by the Federal Bureau of Investigation (FBI) to deal with the wave of anti-Semitism. Last Friday, for example, the head of the FBI James Comey met with Jewish community leaders, who expressed their concern over the inreased manifestations of anti-Jewish sentiment.

Comey promised, in the unprecedented meeting, that the organization will do everything in its power and devote its full resources to combat the phenomenon.

Oren revealed that the Israeli government is also examining ways to help the Jewish community in the United States deal with the rising tide following a direct appeal from the community.

"In the past few days, I spoke with community leaders, and they have expressed their desire to strengthen cooperation with Israel with regard to securing community institutions and defending them against cyber attacks.

"The State of Israel has extensive experience and possesses extensive skills in these areas, and it is only right to make them available to the Jewish communities around the world that are in need of them,” said Oren referring to the numerous bomb threats aimed at Jewish community centers in the last few months.

So far, over 120 such threats were received with one common denominator: with the exception of one person arrested, US authorities are finding it difficult to locate those responsible since they are apparently using advanced technology preventing their identification. Therefore, cyber capabilities are required.

According to Oren, Israel is examining several courses of action, including holding a high-level meeting between Israeli security experts and those responsible for the security of Jewish communities in the United States.

The delegation's visit will be coordinated with US authorities, including the FBI and Homeland Security. The Israeli government is also considering sending a delegation of former senior Israeli defense officials to confer with US Jewish community officials, or holding work meetings in Israel between security officials from Jewish communities in the United States who deal with acts of anti-Semitism, and Israeli experts.

Moreover, options include sending a delegation of veteran elite IDF soldiers to help with the use of new technologies and cyber attacks against Jewish targets and strengthening the physical security of Jewish facilities and institutions. In order to receive the necessary approvals, the delegation will work alongside the US State Department.

"If we decide to send delegations to the US, it will of course be in full coordination with the government," said Oren. "We are considering several options. The Jewish leaders certainly wanted the Israeli government to help them, especially in the field of cyber security."