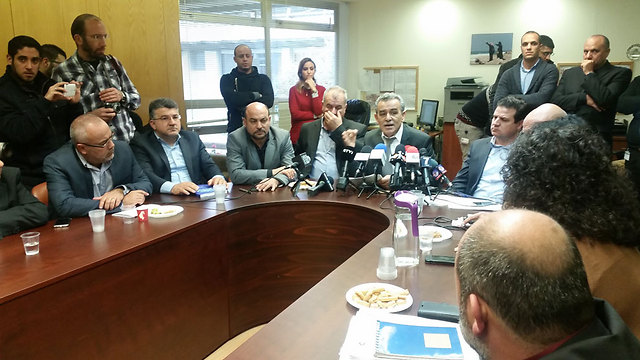 Op-ed: There is only one party in the Knesset that has no room in any coalition or government. As long as the Joint List’s language is Arab nationalism, there will be no coalitional coexistence. This is flawed civilian freedom, and the Arabs are singlehandedly fitting themselves with these cables.

Here are a few words about an impossible surprise: On the night of the last elections, commentators and occasional guests like myself sat in television studios and spoke ad nauseam about what they didn’t know. The elections results surprised everyone, including the big winners from the Likud. In Israel, there is only one stable rule in politics: The surprise factor, usually with the help of one unexpected party. One time it was the pensioners who became the deciding factor, another time it was Kadima, then Yesh Atid, and most recently the Likud, which ended up by 10 Knesset seats stronger than what the polls had predicted. Without an exact science to rely on, all that is left is to believe some of the people some of the time. In other words, to reduce uncertainty through ideology. That’s precisely the reason why ideas of an “obstructive bloc against Netanyahu” is an invention which has no chance of being fulfilled, as the Joint List will never sit with former Defense Minister Moshe Ya’alon, who has expressed a consistent right-wing stance, or even with Yair Lapid.

Joint List members. After 70 years, coexistence is the citizens’ job alone, not the Arab politicians’ (Photo: Eli Mandelbaum)
The next elections will be centered around Prime Minister Benjamin Netanyahu, regardless of the investigations against him. The Likud, which has already proved it can rack up one-quarter of the voters, will face its enemies from the right and the left. Netanyahu will be the reference point. Post-election alliances can take place between all the players on the right: Naftali Bennett, Avigdor Lieberman, Moshe Ya’alon, Moshe Kahlon. There can also be connections with Lapid’s centrist party, and even with the Labor Party and Meretz without Bayit Yehudi. What they all have in common is that they don’t want Netanyahu as prime minister. Some are only saying this behind closed doors, while some are saying it out loud—but their desires are very much alike. There is only one party in the Knesset that cannot be taken into account for any kind of alliance, and that’s the Joint List. It has no room in any coalition or government. It will not be part of an obstructive bloc, and not even of party-list proportional representation deal, as we saw in the latest elections. The essence of its politics is being present in the Israeli parliament, not influencing it.

As long as the party’s language is Arab nationalism, there is no coalitional coexistence. It turns out that after 70 years, coexistence is the citizens’ job only, not the Arab politicians’ job. When Netanyahu spoke about “the Arabs heading to the polling stations in droves,” he was bluffing and taking advantage of the right-wing voters’ fear of the expression of Arab politics. While it was demagogic and blatant, a similar fear exists in an almost identical manner among Labor Party and Meretz voters, only in a different language. Or as Labor leader Isaac Herzog said in one of the closed party gatherings, “We must stop giving people the feeling that we like Arabs.”

Despite Netanyahu’s warnings, the Israeli Arab voter turnout was low. But even if it increases in the next elections, it won’t change a thing. In order for Israel’s Arabs to be part of an obstructive bloc, a future coalition, and maybe even part of a government one day, according to Ze’ev Jabotinsky’s vision, they have to “become Jews.” And not in the religious and national sense, but in the social and cultural context. Integrating into society as a civil and political characteristic, not as a movement under the radar.

Jews everywhere prayed for Jerusalem’s construction, but did everything in their power to integrate into the countries they lived in. They took part in the government, advised kings and presidents and set political movements in motion. Unlike Israel, the Middle Eastern state where it is most convenient to live as a Muslim or as a Christian, the European states were often cruel to the minorities living in them. But the Jews did not despair: When the door was closed in their face, they went in through the window; and if the window was locked, they entered through a crack in the wall. Young Jews served in the army, prayed for the kingdom and had a relationship with the state which was free of national aspirations. It’s enough to see the Jews associated with the Obama and Trump administrations to understand the Jewish mentality of civil life in the Diaspora. Several months ago, there were talks for the establishment of a new Arab party, which would work to advance the sector’s integration in the Israeli society. I saw it as the first Arab startup. There is no need to adopt the entire Jewish model in the Diaspora, but I was convinced that even part of it would help coexistence. Unfortunately, these talks were unsuccessful. We are left with the Joint List. We are left with the limitation, the inability to even surprise in the elections. This is flawed civilian freedom, and they are singlehandedly fitting themselves with these cables.