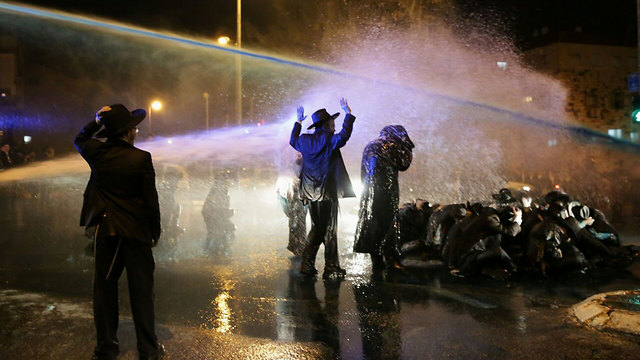 Op-ed: A real revolution is taking place in Israel’s ultra-Orthodox society, but its leaders—who encourage people to enlist in the IDF, get an education and join the labor market—are on their own. Without this revolution, the Israel we know won’t survive.

A war is taking place these days beneath my house in the city of Beit Shemesh between zealots from the Lithuanian Orthodox community’s “Jerusalem faction” and religious and secular residents. Maj. Rabbi Yaakov Roshi, commander of the IDF’s yeshiva student department, has become a favored target of the protests following the faction’s dispute with the IDF on whether young Haredim should show up at the recruitment centers to receive the exemption or not.

The climax arrived several days ago with a pashkevil (public informational poster) containing a “din rodef” (permission to kill an individual who intends to kill or harm others) against Roshi. Rabbi Roshi helps young people who want to enlist, not those who refuse. Roshi’s story is interesting if only due to the fact that some of the residents of Beit Shemesh rushed to defend him. A Zionist city of immigrants has turned with the government’s encouragement—or by the government turning a blind eye—into a Haredi city, and now all the state and religion problems are concentrated there. A microcosm of indecision throughout the years.

Haredi protest. The state and the police should have taken the place of the Haredi society’s cowards (Photo: Aaron Crown / TPS)

One of the videos from the protests shows a religious woman with a head covering holding a pipe and spraying the protestors with water in an attempt to scare them away. The alliances and rivalries inside and outside the city are delicate. The Haredim are silently opposed to the Jerusalem faction, and the national religious and secular Jews in the city are opposed to the process that has already taken place under their nose. The Haredi parties, which know how to preach, disappear at the moment of truth, and the state is watching the processes taking place and doesn’t know what to do.

A real revolution is taking place in Israel’s Haredi society. Half the members of this society—which is split into groups, factions and Hasidic movements—are going out to work. More and more young people are joining the IDF instead of deceiving the army by declaring that Torah is their profession. The knowledge revolution is sweeping all parts of the Haredi society: Smartphones bypassing "kosher" phones that have no text messages or internet, Google and Wikipedia, foreign and Israeli literature, news programs and social media.

Without this revolution, the Israel we know won’t survive. More than 50 percent of first graders are no longer studying in the Zionist educational system. Arabs, who not part of the civil game of rights and duties (due to governmental powerlessness), make up 20 percent, and the rest are Haredim and people who are becoming Haredi from the margins of Religious Zionism.

Revolutions have no rules and no clear finishing line. They are usually noticed only after they end. Nevertheless, the state has a duty here too.

For two years now, the leaders of the revolution—those who are enlisting into the IDF, those who are drafting and those who are encouraging people to get an education and join the labor market—have been out on the front on their own. Any support they receive is behind the scenes. In every public conflict, everyone disappears. The Haredi politicians are afraid to get in trouble, the rabbis are sinking into the books, the friends are shutting their windows so as not to hear the noise.

This is how the campaign against Haredi soldiers developed, this is how an IDF soldier is hanged in effigy on Purim, this is how a person in uniform is beaten up and this is how a “din rodef” is issued in a pashkevil against the head of the IDF’s yeshiva student department.

The state and the police should have taken the place of the Haredi society’s cowards. Instead of dealing with the lenient circumstances and with explanations why the Jerusalem faction is waging a battle or which rabbi is driving the protestors and what inheritance battle is behind all this, we need a clear message of law and order in a democratic state: Whoever uses violence against police officers who arrive to carry out arrests and are pelted with stones (on Monday it was a battle over Haredi sex offenders), or raises his hand on IDF soldiers, will find himself with handcuffs—or even broken hands.

Help the Haredi society’s leaders with their revolution. Those who are leading it are not the politicians are pretending to lead but are too scared.