Prime Minister Benjamin Netanyahu. The worst is yet to come
Photo: AP 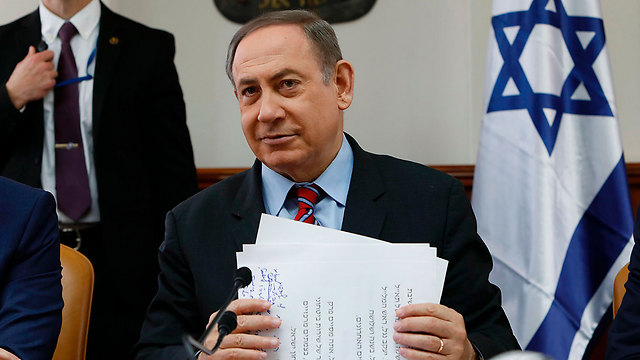 The emperor of the media

Op-ed: Netanyahu, who is up to his neck in criminal investigations, will be the first prime minister in Israel who will get—at his explicit and shameless demand—the appointment of an editor-in-chief in a broadcast media organization. It’s sickening, it’s distorted, it’s corrupt.

That’s the most important thing in the eyes of the ruling family, and it has succeeded big time. Benjamin Netanyahu has brought the Israel Broadcasting Corporation (IPBC) crisis to the temporary climax of the complete political-media chaos. And this is not the end. The worst is yet to come. The news division will be uprooted from the IPBC in favor of a new division, which will be managed and orchestrated by the prime/communications minister.

Netanyahu. Crushing and emasculating the broadcast media, the freedom of information and opinion and the foundations of democracy (Photo: AFP)
The IPBC managers won’t be fired; they will be emasculated. They will be allowed to broadcast only cultural and drama programs, appropriate and less appropriate, and the eye supervising them may belong to Culture Minister Miri Regev. The news division is the heart of a broadcasting station, any broadcasting station. Without it, the IPBC will be managed—if it does go on the air—as a degenerated and faltering body from its very first day. The IPBC without a news division, on its day of birth, is like a baby born without a heart. Let’s assume that one day, the emasculated IPBC decides to air an arts and culture talk show. Just arts and culture. The members of the panel will include writer Meir Shalev, writer David Grossman, painter Yair Garbuz and writer Yehonatan Geffen, as well as artists affiliated with the political Right. They will come together to discuss arts and culture, nothing else. But what if the discussion, God forbid, reaches the topic of artistic current affairs reflected in their work. After all, life in Israel is immersed in troubling and less troubling—and sometimes even scary—current affairs. What will happen then? Will they be hushed by the host? Will the editor telephone the Prime Minister’s Office and ask for instructions? There are more and more examples demonstrating the extent of the insanity. And even if the finance minister, who signed the distorted compromise, swears that there will be no political influence on the IPBC, or on the new news division, or on the veteran Israel Broadcast Authority (IBA), he is either pretending to be naïve or lying to himself and to all of us. There is no longer a need to contemplate Geula Even’s selection as the main news cast presenter. There was no room for that appointment to begin with, but the new news division, which will be managed by the prime/communications minister, won’t even think of appointing her. For the avoidance of doubt, Geula Even is a worthy, professional and incorruptible new presenter. It would be inhumane, however, to expect her to conduct political interviews on a daily basis without creating a conflict of interests with her husband, former Minister Gideon Sa’ar, who wishes to return to political life and to the highest position. It’s unfortunate, but it’s inevitable. One of them would have had to give up, and in this case, how unfortunate, it’s unlikely that the husband would have been the one to do give up. As a journalist, I have covered eight Israeli prime ministers. All but one, Yitzhak Rabin, tried to take over decision-making centers in the broadcast media. They succeeded only partially. Rabin was the positive exception. The only time he complained to me as prime minister, during my term as news manager, was after we aired a report about farmers in the Pithat Rafah region, who complained that growing tomatoes there was unprofitable. Rabin was angry about the allegedly distorted report. Growing tomatoes there is very profitable, he argued in a stressful phone call from his office, and you, the irresponsible television people, reported the opposite. How terrible. I promised to look into it. I put down the phone, rubbed my ears, shook my head from left to right, up and down, again and again, and found it hard to believe. Prime Minister Yitzhak Rabin was troubled by allegedly distorted information about tomato growing in Pithat Rafah. Yes, Rabin, not Netanyahu. Not even Menachem Begin. Netanyahu, who is up to his neck in criminal investigations, is crushing and emasculating the broadcast media, the freedom of information and opinion and the foundations of democracy. He will be the first prime minister in Israel who will get—at his explicit and shameless demand—the appointment of an editor-in-chief in a broadcast media organization. He already has a free newspaper. Now he is appropriating a television station as well, and soon he will storm the free-commercial channels and media outlets. There are already signs of that on the ground. Hurray! All hail the emperor, all hail the empress.