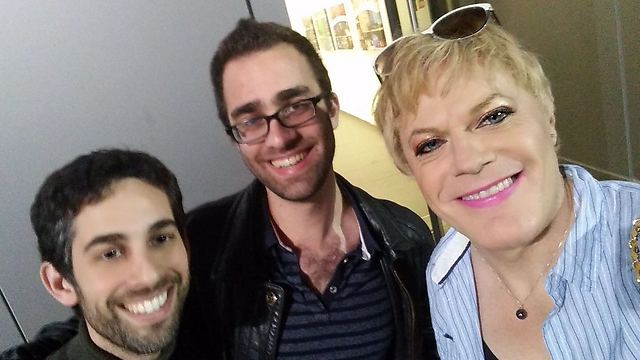 Eddie Izzard banned from 'Palestine Marathon' due to TLV show

The British comedian was supposed to take part in the Bethlehem race on Friday, but following his appearance in Israel the day before, the organizers said, 'We refuse to serve as a fig leaf to whitewash Israeli apartheid.'

British comedian Eddie Izzard did not participate in the Bethlehem marathon on Friday due to the protests of the event's organizers, who were not happy about his appearance in Tel Aviv the night before. On their Twitter account, the organizers wrote, "We refuse to serve as a fig leaf for Izzard's whitewashing of Israeli occupation and apartheid."

As part of his charitable activities, Izzard participated last year in 27 marathons in 27 days. The race was the Fifth Palestinian International Marathon, which set off from the Church of the Nativity and ran along the separation barrier. It was attended by 6,000 people and was divided into 3, 10, 21 and 42 kilometers. A South African runner eventually won the race.

Izzard, a well-known Labour Party supporter, chose to participate in the event, whose goal was to shed more light on both the situation in Israel and "the Occupied Palestinian Territories."

"As someone who was born in Yemen, I took political advice before deciding to perform a show in Tel Aviv, Israel," Izzard told the Daily Mail."I came to the conclusion that as there are many different feelings on this subject and that if I was trying to be balanced, I should do something in Israel and something in the Occupied Palestinian Territories as well.

"So, as someone who is well known for my comedy and my marathon running, I decided to perform the show in Tel Aviv and also run the Palestine Marathon in Bethlehem.