The car ablaze with the dogs inside 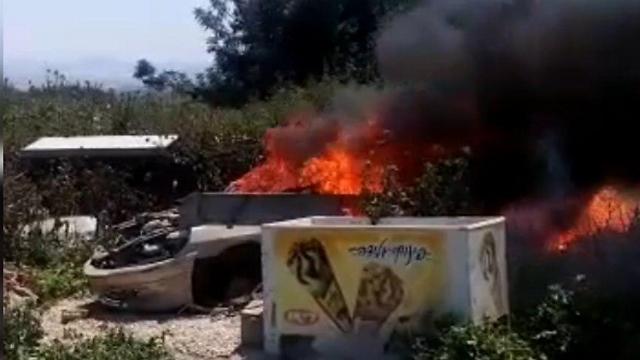 Bone-chilling footage documents the whimpers and cries of several dogs who are locked in a vehicle set ablaze in Umm al-Fahm; the Israel Police are launching an investigation to find the perpetrators.

On Monday afternoon, unknown persons burnt alive several dogs in an abandoned vehicle in the Arab city of Umm al-Fahm.

The incident was filmed, and one can hear in the footage the desperate howling and whimpering of the dogs in the blaze. A fire crew and municipal workers came to the site and extinguished the fire, but they were unable to save the dogs.
X

Residents of Umm al-Fahm harshly condemned the monstrous act. Rami Mahamid, a resident of the city, said, “The people who did this are not human. These dogs were better than they are. It’s a shocking act, and it’s hard for us to digest it… The police have to find the people who burnt the dogs and punish them; they need to be in jail.”

Another resident said, “It’s no different from the murder of a person. I think that such people are mentally ill and don’t deserve to be amongst (other) people. They’re capable of more serious things.” Eti Altman is the founder of Let the Animals Live, a non-profit organization that states its goals as “providing help to distressed animals, rehabilitating them and finding them adoptive homes.” She commented, “Every possible line has been crossed. I implore the public: Watch the video, listen to the whines and cries of the poor dogs that are being burnt alive, and you will understand how animals are treated in Israel.

“There is no red line for human evil. For 30 years we have been asking, day after day, just let the animals live. And look, the scum of the human race is burning dogs for fun. "I call on Minister of Public Security Gilad Erdan, who has been a partner for years in the struggle for animals, to make this a test case. Give the police explicit instructions to find the culprits, no matter what is required. “We have seen in the past that when there is pressure from above, the police quickly find the criminals. I want to look them in the eyes, and I want to see them stand trial and sit in jail for years, so that they will see and be seen. “

The Israel Police said in response, “The video is shocking. We have opened an investigation to locate the perpetrators to bring them to justice.”