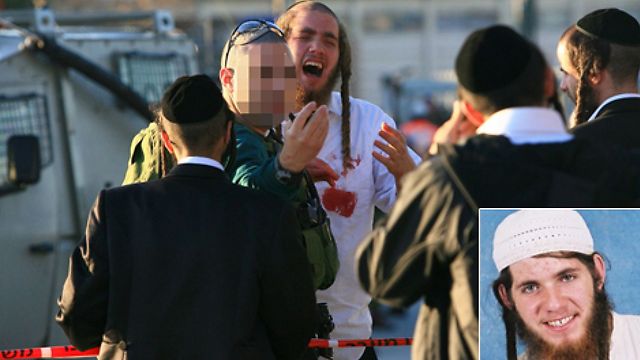 Nawaf Fad was convicted for obstruction of justice by tampering with evidence at the scene of the 2011 shooting; victim's family 'shocked and outraged' and is planning to appeal the verdict.

The Samaria military court sentenced Nawaf Fad to six years in prison on Tuesday for his role in the 2011 shooting at Joseph’s Tomb that injured four Israelis and killed 24-year-old Ben-Yosef Livnat.

Fad was acquitted of murder charges due to reasonable doubt, but was convicted of obstruction of justice for having tampered with evidence by rearranging stones and backpacks scattered at the scene of the shooting.

Ben-Yosef Livnat and the scene of the attack at Joseph's Tomb (Photo: AFP)

Former Culture and Sport Minister Limor Livnat, who is also the deceased victim’s aunt, expressed outrage at the military court’s verdict, saying, “In an inconceivable manner, the verdict acquitted Ben-Yosef’s murderer. The court showed incredible empathy towards the assassin. The family was shocked to hear the verdict, which contains a series of serious and inexplicable mistakes,” said Livnat.

Livnat further argued that the judges reached conclusions that the defendant’s defense did not even raise at trial and that they blatantly ignored conflicting testimonies and an explicit confession by the defendant. “I truly believe that the appeal that will be submitted will allow the truth to come to light,” she contended.

In 2011, Palestinian Authority police opened fire on a three-car convoy of Jewish worshippers traveling to pray at Joseph’s Tomb in Nablus.

After the incident, Palestinian security forces arrested the four policemen who had been responsible for the security of the compound and who were involved in the shooting.

Palestinian sources claimed that the police had ordered the worshippers not to approach the tomb without coordination and that the order was ignored and thus the Palestinians first fired in the air and then at the car itself.

In May 2013, the IDF and Shin Bet arrested three of the policemen after they were released from PA custody. According to the Shin Bet, the three suspects had coordinated their versions of the story so that they would all claim that they believed themselves to be under attack and thus justified in opening fire.

Attorney Haim Bleicher of the Honenu legal organization echoed Livnat and claimed that the acquittal of the defendant had no basis in the evidence and the facts presented in court.

Bleicher also criticized the court’s behavior towards the family.

“This constitutes a double blow to the family, one by the terrorist and a second time by the judges’ misconduct,” he concluded.

Article published with permission from TPS.