New National Memorial Hall in Jerusalem. We are a country of monuments
Photo: Ohad Zwigenberg 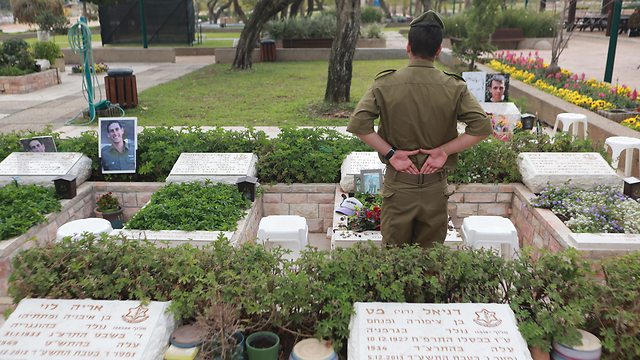 The moment life was shattered

Op-ed: No word can accurately describe that horrible moment experienced by fallen soldiers’ families. Some families collapse immediately after receiving the news and never recover, while the ‘strong’ ones break into tears as soon as they are out of the spotlight. Their lives are divided into two parts: Before and after the knock on the door.

Not a single author or poet has ever managed to capture with his pen that one moment in which bliss turns into grief and life is shattered. No word can accurately describe that horrible moment, after which nothing will ever be the same again. A knock on the door, a short identification, an announcement, and the world collapses all over you. Life is divided into two parts: Before and after the knock on the door.

Unfortunately, I have been an eyewitness and a hearsay witness to hundreds of such sad occasions. For decades, I used to visit families whose lives had been shattered just a minute or two earlier, helping them begin the never-ending journey—the journey into bereavement. With my own eyes, I saw a mother run to the balcony and try to jump from the third floor; a petrified father who stared at us it astonishment and lost consciousness a moment later; family members who refused to believe the dreadful news and repeatedly demanded that we confirm it.

I wish I hadn’t witnessed that. The announcer on behalf of the Town Major’s Office once told me that he had made a mistake—the one and only mistake he had ever made during his service—and informed a family that its son, who was seriously wounded, had been killed. The preparations the military funeral were already underway, when he was told that he must inform the family that a mistake had been made. “Good God!” he said to himself. “I have informed families dozens of times about their son’s death. How do you inform a family that its son is alive?” Unfortunately, he never encountered such a miracle again.

Military cemetery in Tel Aviv. We don't have any more tears to spare (Photo: Yaron Brener)

The family was always informed in the morning, and only then was the fallen soldier’s name published in the media. Slowly, the relatives and friends gathered at the house, embarking on a disintegration journey which lasted for years. There has not been a single family whose life was not shattered after receiving the bitter news about its loss. There have been families which collapsed moments after receiving the news and never recovered. There have been “strong” families, whose restraint was praised by journalists, but which broke into tears as soon as they were out of the spotlight.

Some of the families don’t remember a thing from that horrible day, from that hour and from those minutes, while others remember every single detail: What each of the household members was doing a moment before it happened, where they were, what they felt when the doorbell suddenly rang, who said what, who fainted, who screamed, who froze. Every second and every millisecond have been engraved in their memory and will be with the family its entire life.

There is no other moment in time similar to this moment, in which life is shattered and dreams are broken in an instant. And then, you start compiling and collecting everything that seemed so trivial just several minutes or hours ago and is now turned into a memorial stone: The photographs on the wall, under the table glass, on the refrigerator, in the albums, on the Facebook page; every piece of paper, every written word; every piece of clothing recently worn; every item which the fallen soldier’s hand had stroked or nurtured…

A total of 23,544 men and women have been recognized as fallen Israeli soldiers up to this day. Only some of them were killed by the enemy’s bullets, in operational activities or in wars—but on Monday, hundreds of thousands of people will gather across the country to remember and commemorate all of them.

We are a country of monuments, and the names of many of the fallen soldiers appear on the cold stones and symbolic statues. Now, they are being joined by the National Memorial Hall, which was inaugurated Sunday and will forever perpetuate the names of those who gave the State of Israel the most precious thing of all—their lives. And if we’re wondering what our leaders think, it’s important to know that they left additional empty spaces there for the future. On the State of Israel’s 69th Memorial day, we shall all—rightists and leftists, religious and secular, people of all ages, denominations and religions—pray that they will not be used. We don’t have any more tears to spare.