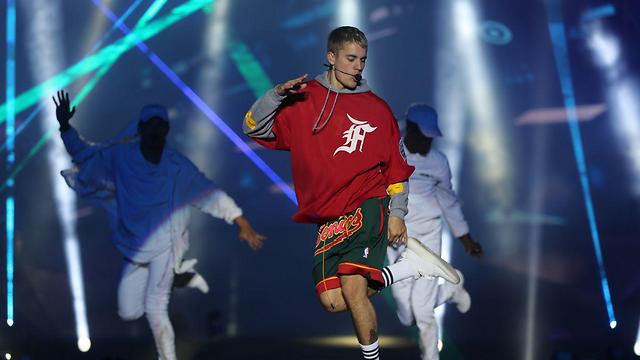 The 23-year-old Haredi fan from Bnei Brak goes into labor during Justin Bieber's Tel Aviv performance on Wednesday; woman brought to hospital where she gives birth to healthy baby girl.

Like tens of thousands of other fans who swarmed Tel Aviv's Yarkon Park for the sultry sounds of Justin Bieber, Bnei Brak resident Reut Ziskind eagerly waited for the show to start. Much to her chagrin however, the second the international pop star took the stage, Ziskind—who was in her 43rd week of pregnancy—didn't even get to hear the first song in its entirety before her water broke.

The 23-year-old new mother was quickly evacuated to Mayanei HaYeshua Hospital, where she gave birth to a healthy baby girl.

"I wasn't having contractions, so I didn't think I needed to be resting," said Ziskind, who asked not to reveal her picture for reasons of modesty.

"At first I was disappointed that I didn't get to see the show because I was going into labor, but now I am happy because I have an amazing daughter," she said.

Ziskind, an ultra-Orthodox woman from Bnei Brak, spoke of her adoration of the 23-year-old pop star.

"I'm a modern Haredi woman, so be surprised, there are a lot of Haredi women who like Justin Bieber. When I bought the tickets I was sure I would give birth before the concert or after it, but I never believed I would give birth during the concert. If I had had a son, I would have named him Justin, but I had a girl and we named her Hadar," said Ziskind.