Memorial Day. Not a day of peace or post-modern philosophy
Photo: AFP 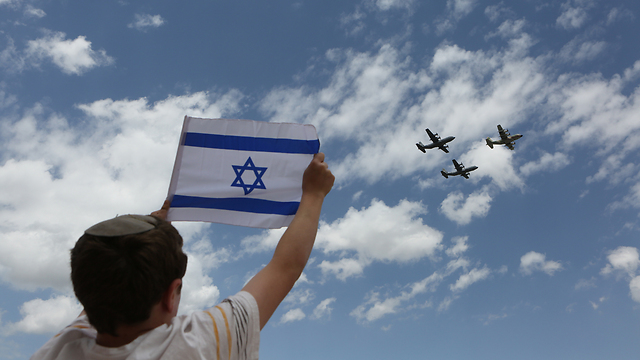 Op-ed: A healthy society mourns its dead and its soldiers, not the other side, regardless of the lightness or severity of the actions committed by the other side's dead. Nevertheless, alternative Memorial Day ceremonies cause no harm to anyone.

In the afternoon on Independence Day, we climbed to the top of Mount Yeela to see the Israel Air Force flyover. Independence is a relative thing when there are children. The planes flew in the sky and the children played on some of the ruins of Dir el-Hawa (Arabic for Monastery of the Winds).

In October 1948, the IDF occupied the area in Operation Ha’har (The Mountain). The residents fled or were expelled, depending on who you ask. The lines at the end of the operation remained the border lines until 1967. Today, there is a tower there, a cheese farm and the entrance to the Stalactites Cave. Anyone looking for the essence of the Israeli story will find it here. A demonstration of Israeli power in the air and under the ruins of the Monastery of the Winds.

The debate on 1948 has not ended. It will only increase when we mark 50 years since the Six-Day War. Border lines are a technical issue. In most countries, they were determined in wars and the agreements that followed. Historic feelings, on the other hand, are a philosophical matter. So are the debates that accompany them. These days, the debate is about memory and celebrations. The debate about united Jerusalem will soon arrive, followed by the never-ending debate about the achievements of the war. Few people remember what happened before that war.

Independence Day flyover. Without the 1948 victory, Dir el-Hawa would have been an active village today, with no Jews around or an Air Force flyover (Photo: Alex Kolomoisky)

In 1948, we experienced our great victory and the Arabs’ loss—the Nakba. Without this victory, Dir el-Hawa would have been an active village today, with no Jews around or an Air Force flyover. The area would have been under Jordanian, Syrian or a different Arab dictatorship’s control. The Jewish people would have remained a hated minority in the world. The Holocaust would have been forgotten because human nature represses evil, and the Jews’ adventure with Zionism would have existed exclusively in the pages of history. Somewhere, a historian would have defined it in his undistributed book as “a heroic attempt to establish a national movement and settle in the heart of the Arab sea in the Middle East.”

Playing “pretend” is precisely the reason why, on the philosophical level, a healthy society has no need to acknowledge its enemy’s disaster, their suffering. Without that loss, we would not exist. Did the Palestinians suffer? The answer is yes, mainly because of a series of bad decisions, visionless leaders, a culture with self-destruction, ignorance and education promoting hatred of Jews. History was written long ago. Debating it is for the future.

The alternative Memorial Day ceremony is therefore, in my opinion, a case of moral confusion. We cannot sustain a society, educate children in school, and order 18 year olds to enlist into the army out of a statement that everyone is right: The winner and the loser, we and the Palestinians, the IDF and its enemy. In an imaginary world, or in a John Lennon song, we live without borders, without wars and without religions. Every inclination of the human heart is evil from childhood, peace is the product of interests, and in the Middle East, religious radicalization is stronger than anything else.

Memorial Day for Israel’s fallen soldiers is not a day of peace or post-modern philosophy. It has a memorial and educational purpose. A healthy society mourns its dead and its soldiers and not the other side, regardless of the lightness or severity of the actions committed by the dead on the other side. Justice and truth are always subjective, but a state cannot be sustained without them, especially here. The thought that truth is by your side and that your way is the right way is simplistic but necessary. And yes, this justice is based on the belief that we are better, we are more ethical, more enlightened and more advanced. A light unto the nations.

A threat to our future

The meaning of the progress mentioned here is the ability to accept the fact that there are Arabs who mark the Nakba. It may leave them in the same spot and prevent them from integrating into the Israeli society, but as long as it’s not from the taxes I pay, as long as the State of Israel doesn’t even subsidize a cup of coffee—it’s their problem. Let them mark the Nakba and remember very well what got them there and what would have happened if it were the other way around.

The progress also includes the basic right of bereaved parents and ordinary citizens to do whatever they want on the eve of Memorial Day, even if I see it as a national vertigo. Unlike certain left-wing organizations that take part in the BDS campaign and in smearing Israel, the alternative Memorial Day ceremonies cause no to harm anyone. The low number of attendees shows that the majority of the Israeli public—including an absolute majority of left-wing voters—are in the national line of sanity. Personally, I was bothered by far-right rapper Hatzel (“The Shadow”) and members of the Lehava organization, who arrived to disrupt the ceremony—not just because of the yelling, but because they are causing strategic damage to the Israeli society’s feeling of justice. Anyone who doesn’t feel the need to visit bereaved families on Memorial Day, to attend ceremonies and feel that we all share the same fate, and anyone whose entire identity focuses on hating Arabs and leftists, is a threat to our future. Only a person who has not fought or carried a stretcher alongside a person with different views is capable of calling leftists “traitors” or religious people “Hezbollah.” This is something that only post-Zionists are capable of doing on Memorial Day, ripping us into pieces intentionally. A leader’s job, among the Jewish people as well, is to develop a healthy society that believes in its rightness, mourns its dead and celebrates its victories. A leader’s job is to set red lines, to protect the little that we have. Whoever is afraid should not be a leader.