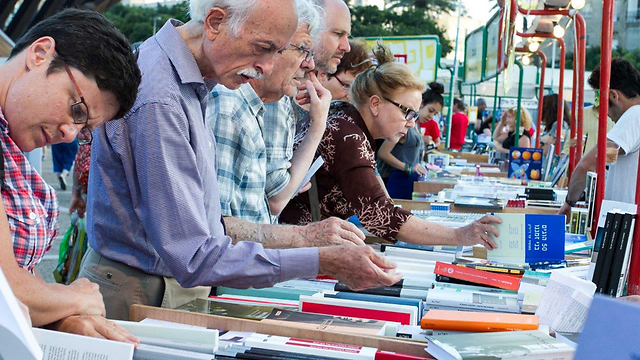 Some 40 periphery cities and communities might not be able to enjoy the Hebrew Book Week, which starts on June 7, as Culture Minister Regev locks horns with Book Publishers Association in fight over budgets.

The Jewish people may be the People of the Book, but Israelis living in the periphery might not be able to enjoy the events of the annual Book Week as the Culture Ministry and the Book Publishers Association of Israel have been locking horns in a fight over budgets.

The Hebrew Book Week is due to begin on June 7 and last for ten days. It will include book fairs in main city squares, talks with writers at public libraries, mobile libraries, and more.

Earlier this week, the Book Publishers Association claimed that due to a shortage of NIS 150,000 ($42,000), which the Culture Ministry failed to transfer, Book Week events will have to be cancelled in 40 periphery cities, with book fairs going ahead as planned only in three major cities—Tel Aviv, Jerusalem, and Rishon Lezion.

Book Week fair in Tel Aviv (Photo: Ofer Amram)
"Since the Association did not have the financial ability to fund Book Week events for many cities in the periphery, in 1999, then-culture minister Matan Vilnai decided that the Culture Ministry will participate in the funding of the book fairs every year," explained Amnon Ben-Shmuel, the director of the Book Publishers Association. "This way, we were able to bring mobile libraries and book fair booths from a variety of publishers to the periphery." In response to the claims, Culture Minister Miri Regev announced her ministry will be the one to organize the book fairs in 60 locations across the country, at the cost of NIS 700,000 ($194,000). "I regret to inform the Book Publishers Association that this year won't be business as usual," Regev said. "In line with the vision of cultural justice, Book Week and Reading Month events will be held with an enlarged budget of NIS 3.73 million (about $1 million) to help encourage reading and emphasize the central place of books for the people of Israel." The Association challenged Regev's plans, saying that "the 'Hebrew Book Week' is protected as a registered trademark of the Book Publishers Association. Only the Association is allowed to hold book fairs and call them 'Book Week.'" The Association called on Regev to meet with them so they could find a solution for the problem. "We believe in the need to bring the Book Week fairs to many communities in the periphery, where there is no access to a public library or even to book stores," the Association said in a statement. "We view these fairs, whose economic viability is in doubt, as playing an important part in encouraging reading in general and among children and teens in particular," Ben-Shmuel added.