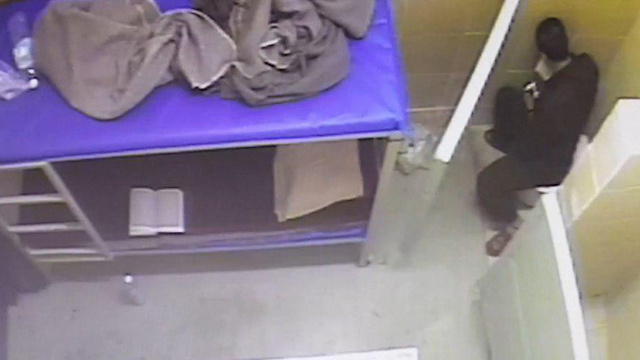 Op-ed: Instead of showing Marwan Barghouti the video in which he was caught eating and demanding his cooperation, or making sure it reached his enemies in the PA, Public Security Minister Erdan chose to release the footage and gain a few more right-wing votes.

Public Security Minister Gilad Erdan could be satisfied that some 1,000 Palestinian prisoners had launched a hunger strike four weeks earlier in the prisons under his authority. This was good news for his voters.

And then came even better news: The Shin Bet, in a planned move, hid a chocolate bar in the prison cell of the striking inmates’ leader, Marwan Barghouti. Barghouti couldn’t resist the temptation. He went into the bathroom and took a bite. A camera installed there recorded the bite. Erdan didn’t initiate the chocolate ambush. He isn’t that smart. But he did take credit for the video’s distribution rights. He won’t let Prime Minister Benjamin Netanyahu steal his thunder.

The hunger-striking prisoners include murderers and mass murderers. There is not a shred of sympathy in me towards them. Their nutrition habits don’t concern me. What does concern me is the extent of cynicism and cowardice around the government table.

Barghouti caught eating in his cell. As the strike’s leader, he is a legitimate target. The question is what should be done with the video (Photo: Israel Prison Service)

The prisoners’ strike is primarily a result of the conflict between Barghouti and his supporters and Palestinian President Mahmoud Abbas and his supporters. It’s a conflict within the Fatah movement. It is partially connected with Israel, but like previous hunger strikes, it carries potential damage for Israel, both within and outside the prisons.

Some security officials believed that the strike could be prevented. Some of the demands presented by the prisoners were reasonable. They demanded, for example, the installment of sprinklers on the prisons’ rooftops to cool them off in the summer heat. This week, such sprinklers are being installed on the roof of the Gilboa Prison’s security ward, and in the coming weeks they will be installed in additional prisons. The striking prisoners were not asked for anything in return.

In the cabinet discussions on the eve of the strike, the Israel Prison Service (IPS) presented a policy of opposing any negotiation. The reasoning behind such a course of action, or lack thereof, was that this strike must be broken, as a lesson for all to see.

“We want to deny the prisoners this tool,” acting IPC Commissioner Asher Vaknin told me on the eve of the strike, following orders he received from Erdan. The cabinet heard the argument and approved. Not a single minister dared open his mouth, for fear that he would be accused of being a leftist.

There is another reason for the silence of the lambs in the cabinet. The ministers met with the families of Hadar Goldin and Oron Shaul, whose bodies are held by Hamas. The ministers, led by Netanyahu, knew that the first demand raised by the families—to starve Gaza—would not bring back the bodies. At the most, it would drag the IDF into another war in the strip. They made the families false promises.

In the next stage, the families demanded an aggravation of Hamas prisoners’ jailing conditions. The ministers knew that such a move would be useless too, but were afraid to tell the families the truth. The hunger strike was launched by Fatah prisoners, not Hamas prisoners. They definitely won’t return Goldin and Shaul. But the cabinet ministers are afraid that someone will launch a tweet accusing them of betraying the fighters.

Erdan’s chocolate show was the highlight of the event’s politicization. The trick was justified: Barghouti, as the strike’s leader, is a legitimate target. The question is what should be done with the video. One option that was raised was to approach Barghouti, show him the footage and suggest that the film be shelved in return for cooperation; another option was to make sure that the video reached Barghouti’s enemies in the Palestinian Authority. They would have taken care of the rest. Erdan chose, as we know, the third option, which for a moment turned him into the Right’s hero on social media and the envy of his fellow ministers.

The IPS is not the only one adding fuel to the prisoners’ strike. Before the strike, the Red Cross decided to reduce the frequency of its prison visits—from twice a month to once a month. The prisoners are demanding a return to the previous arrangement. The Red Cross agrees, but one of the security organizations in Israel currently objects.

Another example: Kindergarten-aged children were not allowed to cross the Hizma and Tulkarem checkpoints to visit their father in prison, as they had no crossing permits, and this led to a great unrest in the prisons.

A third example: The report about the plan to bring doctors from a foreign country to force-feed the striking prisoners. There is no such plan in the IPS, and in the meantime, there are no courts in Israel that will order force-feeding. Someone in the government thought this was the commander’s spirit, and created a storm.