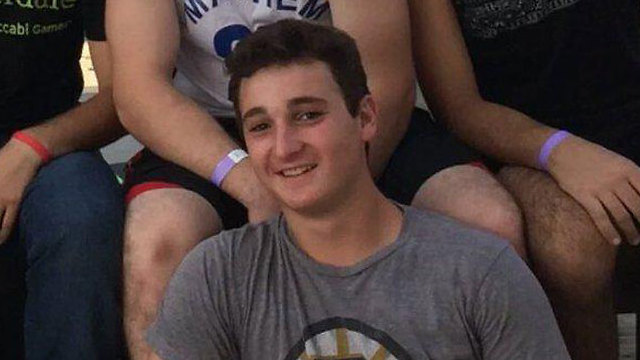 Terror victim's mother: My son's murderer gets payments from the PA

Ruth Schwartz decries the Palestinian Authority's payments to the terrorist who murdered her son; 'My son's killer should not be rewarded for murdering innocent people; that is how you glorify and encourage terrorism,' she tells a special forum on the glorification of terrorism at the UN.

Ruth Schwartz, whose 18-year-old son Ezra Schwartz was killed by a Palestinian terrorist in Gush Etzion in November 2015, spoke out at the UN against the Palestinian Authority on Wednesday for compensating terrorists.

"The terrorist who murdered our Ezra is receiving a monthly stipend from the Palestinian Authority," Ruth said. "Ezra's murder broke our family; we will never be the same without him."

Ruth spoke at the United Nations during a special forum on the glorification of terrorism, organized by Israel's ambassador to the UN, Danny Danon, in partnership with the non-profit pro-Israel education and advocacy organization StandWithUs.

"My son is the victim of the worst crime," she said. "He was brutally taken from his family and friends forever. He will never be able to have fun or make someone smile, go to college, get married, have children or do anything in this world again. I will never again get to hug him or tell him that I love him. Instead, I get to visit him at the cemetery."

"I’m here because, as Ezra’s mother, it is my duty to fight for my son," she continued. "My son's killer and his family should not be compensated for murdering innocent people. It is just another way to glorify and encourage terrorism. It’s offensive and wrong."

"Terrorism knows no boundaries, it can affect anyone. No one is immune to it," she cautioned.

The bereaved mother finished by making a simple request. "Please do not kill and please do not reward people who kill, because it is as if you are doing the killing yourselves."

Danny Danon and Ruth Schwartz
Ambassador Danon then informed the forum that the Palestinian man who murdered Ezra and two others is currently receiving a monthly stipend of more than $3,000 for his reprehensible acts, calling it "blood money." "This is the PA's prize money for terrorists who kill innocent civilians," said Danon. "Foreign aid given to the PA by the international community is exploited by the Palestinians and used to support terrorism. The more they murder, the more they are paid." "The international community must not accept this dangerous precedence," Danon continued. "We call on the Security Council to act to put an end to these payments and finally stop Palestinian support for terrorism."

Ezra's funeral (Photo: Dana Kopel)
The event was held as part of Danon's efforts in the UN against the PA's funding of terrorism. About two weeks ago, Danon presented data on the PA's payments to terrorists at the UN Security Council. "In 2016, the PA dedicated almost $130 million of its budget to paying imprisoned terrorists," he said during a short press conference. "They spent another $175 million in allowances to the families of so-called martyrs. Altogether, the PA paid more than $300 million directly in support of terrorists every single year." This amount, he said, comes up to about seven percent of the PA’s yearly budget, and almost 30 percent of the foreign aid donated by the international community. "So many members of the Security Council, so many UN member-states, are sending their people’s money to support terrorists,” the ambassador bemoaned.

Danon, at the UN
"This is all part of an organized system by the PA which glorifies terrorists and encourages terrorism, these payments are mandated by their laws," clarified Danon. "Think about the simple message this sends to young Palestinians. Mahmoud Abbas is telling them that there is a simple equation: kill innocent people and you and your family will be paid for the rest of your life." The ambassador, who sent an official letter about the issue to the Security Council several days before the press conference, called on the international community to keep track of their aid money to the PA and make sure the funds don’t go towards payments for terrorists. "It is absurd to condemn terror, while at the same time paying terrorists," summarized Danon. "It’s time for the UN, the Security Council, and the entire international community to finally tell Abbas that enough is enough.” (Translated & edited by Lior Mor)