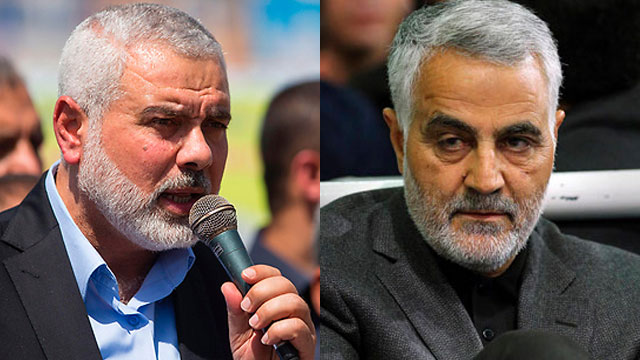 Iran has decided to renew financial aid to Hamas after a prolonged period of frosty relations between the two sides that lasted for years, according to a report on Tuesday in the English newspaper Asharq Al-Awsat.

The report claims that the decision was made after a series of meetings between senior Hamas figures and members of the Iranian Revolutionary Guards in Beirut.

Intensive talks were held between the sides, the report noted, in which senior Hezbollah figures also took part and cluminated in anagreement in principle to renew Iran's financial support for Hamas. Among other things, it was also agreed to renew and improve relations between the two sides.

Moreover, it was decided at the talks that Hamas leader Ismail Haniyeh would visit Tehran in the near future in an effort to bring about a reconciliation and in order to build new bridges between Tehran and Hamas.

The decision was made only a week after another step had been taken to bringing the Islamic Republic closer to the Gaza terrorist organization when Iranian Quds Force commander Qassem Soleimani sent a letter of congratulations to the new political bureau chief, Haniyeh, for his election.

Since his election to head the terror movement, Haniyeh has received warm greetings from Iran's leaders, and the recent talks attest to Iranian satisfaction with the personnel changes in the Hamas leadership.

Relations between Iran and Hamas have been in a state of stagnation since the outbreak of the civil war in Syria, and Hamas has expressed opposition to Bashar Assad's regime and support for the rebels, contrary to Iran and its proxies in Lebanon—Hezbollah.

Relations between the two sides deteriorated further as support from Iran and Hezbollah lent to Hamas was significantly reduced, but not completely halted.

The connection between Khaled Mashaal, former head of Hamas' political bureau, and Iran's sworn enemy in the region—Saudi Arabia—did not contribute to the restoration of relations. At the end of Hamas' internal elections, members of the pro-Iranian faction in Hamas won significant positions (Haniyeh, leader of the organization, Yahya Sinwar, Gaza's Hamas leader, and other senior figures in the Hamas leadership).

Iran feared that the election of Musa Abu Marzuq as the leader of the organization would further weaken the already precarious relations since Abu Marzuq was believed to have thought that Iran was not helping Hamas. An anonymous source (apparently a Middle East intelligence agency) broadcast about a year ago an intercepted phone call between Abu Marzuq and another man, in which he strongly attacks Iran, accusing it of talking too much without acting in support of Hamas.

In a letter sent by Soleimani, he also congratulated Yahya Sinwar, one of the released prisoners of the Shalit deal who was appointed Hamas leader in Gaza and supported the renewal of the alliance with Iran.

"We expect to strengthen cooperation with members of Hamas, the allies of the axis of resistance, in order to restore the debate on the Palestinian issue," Soleimani wrote. adding that the Revolutionary Guards expect to see the efforts of the Gazan organization to implement the resistance, following Hamas's jihadist line, which only recently published its new political document as part of an attempt to open up to the world.

Soleimani later expressed his hope for "a wise government that will ensure a better future in which internal crises will be handled wisely." Soleimani told Haniyeh that he expects their efforts to bring the Palestinian issue back to the forefront of the global struggle of Muslims and free believers.