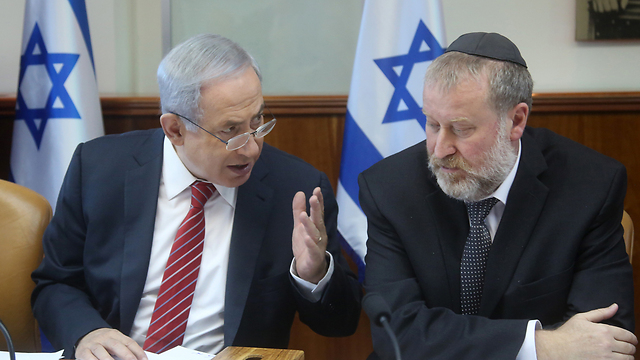 When the defense counsel is also the prosecutor

Op-ed: Any jurist, as talented as he may be, is incapable of advising the prime minister while simultaneously being in charge of his investigations. An attorney general cannot help the government implement its policy, and at the same time restrict the government with different arguments.

The attorney general position should have been split a long time ago. Greater and smarter people have said so before me. Three justice ministers (Yaakov Neeman, Daniel Friedmann and Ayelet Shaked) announced a reform and came under fire. International law experts have published studies about the importance of the split, which have been ignored, and now common sense comes into the picture too.

Fate always laughs at fanatics, even at fanatics in the name of the rule of law. And now, in light of the claims the attorney general and the State Attorney’s Office are making it difficult to investigate Prime Minister Benjamin Netanyahu, and in light of the discussions on freedom of speech and press, it seems the psychological barriers can be lifted ahead of this important move.

With all due respect to jurists, the argument for the importance of this reform doesn’t come from the legal world but from psychology: One person, as talented as he may be, is incapable of being both a defense counsel and a prosecutor at the same time. There is not a single jurist who is capable of advising the prime minister while simultaneously being in charge of his investigations. One person cannot help the government implement its policy—as determined by the government—and at the same time restrict the government with different arguments. This is something Knesset Member Bezalel Smotrich is right about in his new bill, which stipulates the attorney general should work for the government.

Mandelblit and Netanyahu. A person who drinks coffee with ministers, or hangs out with the prime minister for many hours, has to have a remarkable ability to ignore the personal relationship (Photo: Marc Israel Sellem)
If the government decided the State of Israel is advancing the Regulation Law, for example, there has to be someone to help and represent the government in the High Court. It’s as important as the second legal official, who will have to explain to the government its limitations. The representative and the advisor cannot be the same person with a multiple personality. The same applies to the investigations of public figures: A person who sits with ministers around the table and drinks coffee with them, or spends a lot of time with the prime minister, has to have a remarkable ability to ignore the personal acquaintanceship. There is no human iron wall when a person deals with issues that could destroy his acquaintances’ lives. That’s the nature of the world, that’s the nature of man. I have personally seen one attorney general, who was supposed to deal with the people around him, in all his weakness. It didn’t work then, and it won’t work in the future. And it’s not the attorney general’s fault—it’s the fault of whoever created this odd position. Absurdly, almost all of those who have been traditionally against splitting this position are the ones who have been blasting the attorney general in recent weeks over his failure to make decisions in the Netanyahu affairs. The opponents of the past are the protestors of today. Those who are demanding quick decisions are those who did not allow these decisions until today. Until today, they used the holy words “protecting the rule of law” as an argument for their perception, as if those who are working to reduce judicial activism and split the attorney general’s position are seeking chaos. Those who use historical and geographical comparisons for decisions made by the State Attorney’s Office or the attorney general are wrong and misleading. Netanyahu is not Recep Tayyip Erdogan and Israel isn’t Turkey. This isn’t Europe either. It’s the land of folly.

And speaking of folly, the police raid on the offices of the Yedioth Books publishing house can be seen the same way. Transferring documents through his lawyers was apparently a foolish act on the part of former prime minister Ehud Olmert. I am unfamiliar with the jail procedures, but I am well familiar with the procedures of book publishing houses and censorship, as well as with the need to separate what you know from what you deal with publicly as a writer or as a journalist.

Unfortunately, most public figures allow themselves to talk more than their subordinates—a sort of reverse personal example—from Benjamin Ben Eliezer as defense minister and former Military Intelligence Director Eli Zeira, through former Mossad Director Meir Dagan who discussed his objection to a strike in Iran with the Americans, to Netanyahu who—as opposition leader—took responsibility for an incident that Israel had not acknowledged, and former prime minister and defense minister Ehud Barak, who was interviewed on the Iranian issue. And perhaps the worst thing of all: A highly classified presentation that was leaked to Channel 2 News during Operation Protective Edge, along with operative IDF plans.

Of all these things, writing a book on sensitive issues and handing it over to the censorship and to a ministerial committee, as required by the law, is the least problematic thing. The wise men at the State Attorney’s Office will have to come up with good excuses for their decisions to stop playing by the rules.