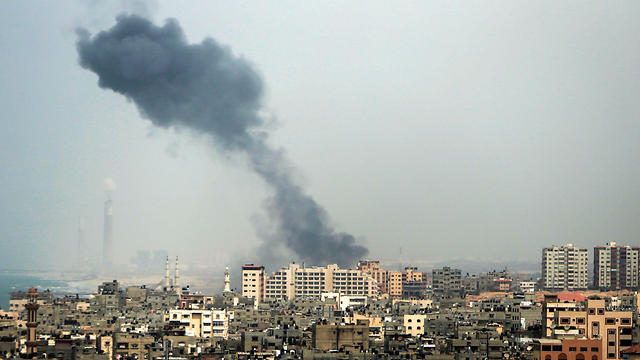 Strike hits two Hamas military posts in Gaza City and Rafah; none reported hurt in Israeli retaliation; late Monday, a rocket fired from Gaza landed in an open area at the Shaar HaNegev Regional Council; none were hurt and no damage reported.

The Israeli Air Force (IAF) attacked two Hamas targets early Tuesday in northern and southern Gaza in response to rocket fire at Israel from the strip the previous day.

According to Palestinian reports, the strike targets were two positions of Hamas's military wing, one in Gaza City and the other in Rafah. No one was reported hurt in the strikes.

Past IAF attack in Gaza (File photo: AFP)
A rocket fell in an open area at the Shaar HaNegev Regional Council on Monday night, causing no injuries or damages. It was not preceded by a Code Red rocket-alert siren as the system identified the rocket would fall in an open area.

"Since the terror organization Hamas is the ruler of the Gaza Strip, it is responsible for any attempt to harm the State of Israel," the IDF said in a statement following the retaliatory attack.

This is the fire rocket launch from Gaza to Israel since mid-March. The IDF estimated Islamic Jihad was behind the rocket launch, while Hamas has been working to prevent rocket fire at Israel.

Hamas, on its part, accused Israel of making false claims of rocket fire to justify attacking in Gaza. "The Israeli claim of a rocket being fired from Gaza and the 'release' of a claim on behalf of ISIS to excuse what happened afterwards—escalation and an attack of resistance positions—are part of a dangerous and transparent Israeli game."

In its statement, the terror group further warned Israel would bear the consequences of its actions and policy.