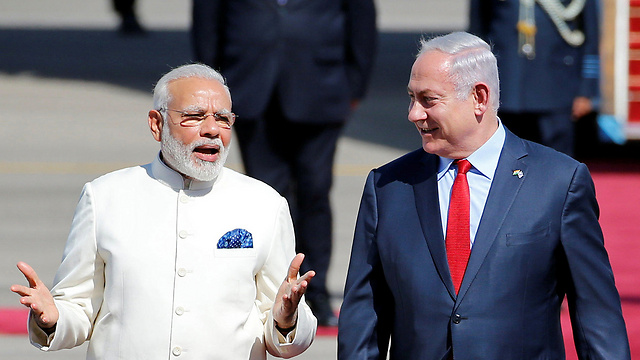 Op-ed: Israel’s diplomatic situation has never been better. The US president supports us more than others, the Europeans criticize Israel’s policy but respect us, African and Far East countries are developing economic ties with us, and even Sunni Arab states prefer semi-secret relations over total isolation. The Indian prime minister’s historic visit is just part of this process.

There is no international isolation, period. Now, we can hold the political debate inside Israel about the chances of peace. A peace agreement with the Palestinians, diplomatic agreements and settlements—everything can be discussed, but without threats and intimidations.

Israel’s diplomatic situation has never been better. That appears to be the required conclusion. There is a crazy and capricious president in the White House, but for now, he supports Israel more than others. The Europeans criticize Israel over its policy, they can’t stand Prime Minister Benjamin Netanyahu as a person, but they respect Israel. Distant players in Africa and in the Far East are developing ties and developing an economy. Even the Sunni Arab states recently discovered Ze’ev Jabotinsky’s Iron Wall: They prefer semi-secret relations over total isolation. Indian Prime Minister Narendra Modi’s visit is just part of this process. Another historical visit with an economic and diplomatic importance.

Netanyahu and Modi. Decent people, who don’t see themselves as part of a herd, should acknowledge the prime minister’s diplomatic and economic achievements (Photo: Reuters)

I’m one of those who thinks that it’s time for a different leader from the national camp to replace Netanyahu. He is worn out and so are we. The tribalism that his recent term has been nurturing is harmful for the people of Israel in the long run. It changes nothing when it comes to his diplomatic and economic achievements. Decent people, who don’t see themselves as part of a herd, should acknowledge Netanyahu’s advantages, just like his supporters should acknowledge his problems.

The Judea and Samaria issue doesn’t disappear in such visits. I believe it doesn’t disappear even with prime ministers who are willing to take dangerous gambles. The Europeans are clinging to the idea of two states for two people within the 1967 borders, and Netanyahu, by the way, provides them with these damaged goods in the interviews he gives in English. UNESCO and the United Nations’ Human Rights Council will keep being parodies of an international institution for the sake of humanity.

Most people dealing with the Middle East are clinging to the Palestinian story about colonialism and a conflict that began and could end in the 1967 borders. This is reality, and because there is no real solution and peace in the horizon, we are getting entangled in rhetoric battles.

All this is happening, but proportions are needed—and they are provided by a visit like the Indian prime minister’s visit. Israel of 2017 is not threatened by boycotters and BDS movements—even if many politicians here see them as a convenient enemy. It’s facing no diplomatic threat either.

The thesis that there is international isolation due to the lack of negotiations with the Palestinians is nonsense: Today, there is a tiny number of boycotters compared to the thousands of companies in the days of the Arab boycott. There are fewer countries which would pass a resolution comparing Zionism to racism, as they did in 1975. The number of countries severing ties with Israel is decreasing. The world revolves around interests, and a democratic Israel is a top interest in the Middle East. A stable democracy is a rare commodity here, and we should remember that when discuss our situation.