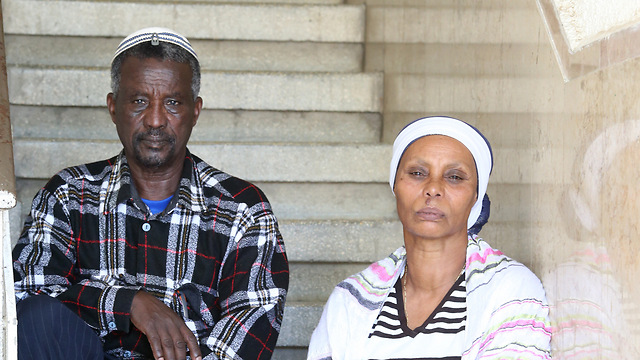 If only his name were Friedman

If the mentally-ill Israeli held in Gaza was a guy named Hendel or Shitrit, we would have already launched a public campaign for his release. But the common Israeli is unable to identify with an Ethiopian immigrant called Abera Mengistu, who doesn’t have or friends from school or from the military unit.

Abera Mengistu didn’t cross my level of media interest. That’s my harsh truth and his. I realized that this week, when several activists held up a sharp mirror to my face for his sake. They approached me, I responded automatically, and then came the thought and finally the following recognition. Many people are vaguely familiar with Mengistu’s story. A young man of Ethiopian descent from a poor family, who crossed the border fence and was taken captive by Hamas. Allegedly, Israel doesn’t leave anyone behind—as Operation Entebbe, Operation Isotope and the battle heritage prove—unless it’s a mentally ill young man who intentionally got into trouble. It’s possible he wanted to commit suicide and, on the way, get us entangled in an unnecessary terrorist release deal. No one knows, and most of us don’t exactly want to know. But what if he were a different young man? Let’s assume that his name was Yoaz Hendel from a moshav in the Mateh Yehuda Regional Council, who had become mentally ill as a result of the vicissitudes of fate or genetics? One day, he wakes up delusional and overwhelmed and decides to cross the border to Gaza due to suicidal tendencies. Or what would we have done if his name was Shitrit, a former Paratroopers Brigade fighter from Ashkelon, or Friedman, a former Golani Brigade fighter from Ofra? Let’s engage in some guided imagery: Is there a slim chance that months would have gone by without any of us knowing that they were being held on the other side of the border? Would journalists like me have pushed them to the back of their mind? Would we have not spent time thinking about them and about their families? Of course not. Not a chance.

Avera Mengistu's parents. If he had a different name, would we have not spent time thinking about him and his family? (Photo: Tomeriko)
The feeling of mutual responsibility goes beyond common sense. In the United States, such a person could rot in the North Korean prison for years. In Israel, however, people like Hendel, Shitrit and Friedman would spark a public campaign. But not Mengistu. Not Ethiopian immigrants who live in a slum. He doesn’t have a glorious combat service behind him, or friends from school or from the unit, which is why the common Israeli has nothing to identify with. And if that were not enough, the color of his skin is black, and not black as an expression of the “ethnic demon” which is raised and shelved for election purposes. And here’s the harsh truth: We aren’t interested because he’s not considered a part of us, because the circumstances don’t evoke enough empathy, and because the potential price could be higher than what we would be willing to pay for one Mengistu.

“One does not ransom captives for more than their value because of Tikkun Olam,” according to Mishna Gittin—the essence of the proper strategy for dealing with the abduction of citizens and soldiers. Before the fear of religionization, this sentence turned into a directive. Before the Jibril and Shalit prisoner exchange deals, Israel insisted on two basic rules: There will be no negotiations with terrorists, and murderers with blood on their hands won’t released. Israel uses force to fix what terror organizations do. That’s the reason we sent soldiers all the way to Entebbe, that’s the reason Captain Nir Poraz was killed in the rescue mission for IDF soldier Nachshon Wachsman, and that’s the reason Netanyahu explicitly wrote in his book “A Place Among the Nations” that Israel does not negotiate with terrorists.

But those days are over. The Jibril deal set an insane price, and the Shalit deal proved why “A Place Among the Nations” illustrates the difference between words and action. The damage caused by those deals is ongoing, and now we have to deal with Mengistu: An Israeli of Ethiopian descent who wasn’t sent to Hamas by anyone, except his own internal demons, and a whose value is rated very low by the public.

Israel is in a catch-22 situation: The lightness in which previous governments allowed themselves to carry out harmful prisoner exchange deals put a conceptual end to the option of exerting force and pressure to solve the problem. Considering that Hamas allegedly has “assets” with a low “price tag,” this could be an opportunity to go back to a tough policy like aggravating Palestinian prisoners’ conditions in Israeli jails and pressuring the Hamas leadership. Thinking outside the box we have gotten used to—paying a price in terrorists or finding a way to ignore it. There are two fallen IDF soldiers and a citizen named Abera Mengistu there, and the message is that we will claim the price.