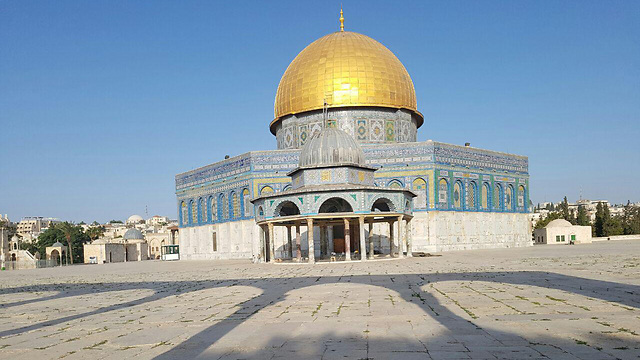 Op-ed: Whoever put Waqf in charge of Temple Mount instead of Antiquities Authority created a religious monster. Removing metal detectors from site is a security mistake and governmental weakness. Nowhere in the world would metal detectors be given up for hurting people’s feelings.

According to tradition, the Foundation Stone is located under the Dome of the Rock at the Temple Mount. That’s where it all began. The Holy of Holies at the Temple or the place where Muhammad and his horse ascended to heaven. Some archaeologists say what we see under the mosque today is a relic from a pagan shrine, but that makes no difference as far as the believers are concerned. Fake archaeology existed way before fake news. Holy sites have their own life. They are born in people’s minds and die for no reason.

We should listen to Jerusalem District Police Commander Yoram Halevy. In the sea of hesitant voices, he speaks to the point. A metal detector is a metal detector. Incitement is incitement. All the rest is the gap between the bombastic statements of sovereignty and the national sugar crash a moment later.

This crazy reality actually began at a time when people knew how to make decisions. The days of joy over the Six-Day War victory. That’s how the Mughrabi neighborhood and its 600 residents were forcibly evacuated to create the Temple Wall plaza at the site, instead of another Arab neighborhood which Israel doesn’t enter and doesn’t invest in. That’s how Israeli communities were built in the Jordan Valley to reinforce the eastern border, and that’s how the city was united. In the Temple Mount’s case, the decision was a strategic mishap.

Whoever put the Waqf in charge of the Temple Mount instead of the Israel Antiquities Authority created a religious monster and a center for a Jewish-Arab conflict. The Palestinian identity was created through Zionism and its victories—a people which wasn’t a people and adopted a national identity through hatred. The Temple Mount’s Muslim religious identity and sacredness are developing similarly thanks to the Israeli indecision. It’s not about the sanctity of the Koran, but about the sanctity of the conflict with the Jews.

The decision made in 1967 was followed by thousands of unmade decisions. It took 50 years for the place to turn into a threat in our eyes: Digging the Western Wall Tunnels, taking care of ruined antiquities, renovating the Mughrabi Bridge—which was deemed dangerous by the city engineer—or placing security measures to prevent the smuggling of weapons. Everything is sacred, everything is a threat.