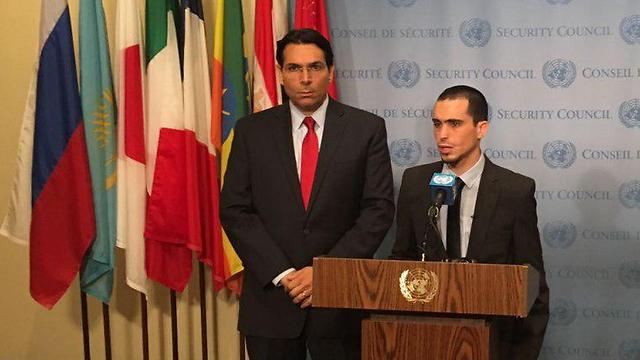 Oren Almog lost five members of his family, along with his eyesight, in a terror attack when he was only 10 years old; fourteen years later, he addresses the United Nations' Security Council to talk against the Palestinian Authority's payments to convicted terrorists imprisoned in Israel and their families.

Oren Almog, who lost five members of his family along with his eyesight in a terrorist attack at the Maxim restaurant in Haifa in 2003, called on the UN Security Council on Tuesday to work to stop the Palestinian Authority's payments to convicted terrorists.

"In a few minutes, the UN Security Council is about to hold a discussion on the Middle East. But one of the most important subjects, will remain outside this discussion: Funding of terrorism by the Palestinian authority," said Almog.

"Yes, the same Palestinian leadership, which talks with international leaders about its desire for peace, is actually paying salaries to terrorists and their families, every single month. Salaries that rise relating to the number of victims—those who kill more, get more," he explained.

Oren Almog speaking at the UN

"I think anyone who believes in the value of human life should act. Therefore, I am calling all the countries, whose representatives are here in this building: help, and if necessary, force President Abbas to make the right decision," Almog went on to say.

Oren Almog and Israeli representative to the UN Danny Danon

"Can you imagine a political entity, represented in this house, paying rewards to the terrorists who murdered your family? I can’t. But this is exactly the absurd reality for me and for the other victims of terrorism in Israel. However, we can still change it! I’m sure with your commitment—in the end—the good guys will win," he concluded.

The Maxim restaurant suicide bombing—which claimed the lives of 21 people and left 51 wounded—was perpetrated by Hanadi Jaradat, who blew herself up in as an act of revenge after undercover IDF operatives in Jenin killed her cousin and her younger brother, both of whom were members of Islamic Jihad, with her cousin being a senior member of the Al-Quds Brigades.

According to Haifa police sources, the aftermath was gruesome, with some of the dead still sitting upright at their tables, while others, including children and babies, were slammed against the walls. Among the victims were two families and four children, including a two-month-old baby.

Almog's father Moshe, his brother Tomer, his grandfather Ze'ev, his grandmother Ruth and his cousin Asaf all perished in the attack. His mother, sister and aunt were wounded. The person who planned the attack, along with the person who aided Jaradat in the execution of the bombing, were sentenced to decades in prison, yet receive $3,000 a month from the PA.

Almog, who was 10 at the time of the attack, was seriously wounded and blinded. After his discharge from the hospital, he began a long rehabilitation process, at the end of which he won third place in the Blind Sailing International Championship. Following that, and despite his limitations, he insisted on enlisting in the IDF and served in an elite unit.

After his release he started a technological venture, and today he works for Etgarim: Israel Association for the Disabled, gives lectures about his personal story and is involved in entrepreneurship in several projects.

Almog is not the first terror victim to speak at the United Nations against the PA's funding of terrorists. In May, Ruth Schwartz, the mother of the late Ezra Schwartz—a US citizen who was murdered in the Gush Etzion attack in November 2015—arrived at the UN and called to stop the payments to the family of the terrorist who murdered her son.