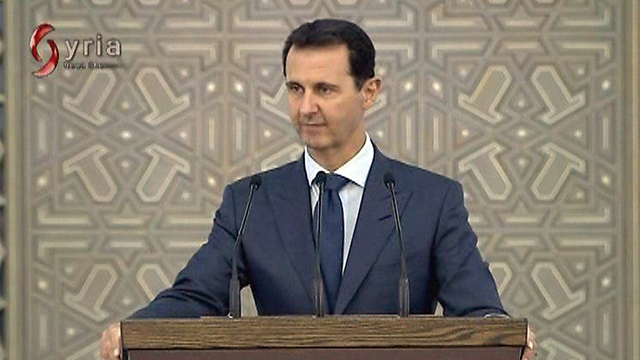 The embattled president boasts success in war against rebels, but says 'battle continues'; thanks allies Russia, Iran and Lebanon's Hezbollah for helping his army make battlefield gains and reduce the burden of war.

Syrian President Bashar Assad said on Sunday that while his country had foiled Western designs to topple him, his army had not won defeated insurgents and the fight was continuing.

"The price of resistance is much lower than the price of surrender… we paid a dear price in Syria in this war, but we managed to foil the Western project," he said in speech before dozens of Syrian diplomats in Damascus.

Assad noted, however, that even though there were signs of victory after six-and-a-half years of civil war, the "battle continues, and where we go later and it becomes possible to talk about victory...that's a different matter."

The West, he said, was experiencing an existential crisis because "some countries defy it. The West is in hysterics every time it feels there is a country that wants to share in the decision-making. The West won't allow even Russia to rise against its hegemony, and this is the situation with Syria, Iran and North Korea as well."

Assad praised the assistance extended by stalwart allies Russia, Iran and Lebanon's Hezbollah movement, saying their aid had enabled his army to make battlefield gains and reduce the burden of war.

"Their direct support—politically, economically and militarily—has made possible advances on the battlefield and reduced the losses and burdens of war," Assad added.

He said his country welcomed Russian-brokered, regional ceasefire deals that Moscow is seeking to extend elsewhere in Syria as these would end bloodshed and bring an end to insurgency and pardoning of rebels.

"We have an interest in the success of this initiative," he noted.

Assad condemned US-inspired "safe zones" which President Donald Trump earlier this year said he hoped to achieve with Russia, saying such a plan would only "give cover to terrorists."

He also attacked Turkish President Recep Tayyip Erdoğan, who supports the rebels in Syria. “Erdogan is playing the role of political beggar after his support for terrorists was exposed. We don’t consider the Turkish side to be a partner nor a guarantor nor do we trust it,” Assad said.

The Syrian president also noted that the Palestinian issue was still important to Damascus. "Israel is still our enemy and still the occupier of our land, and we still support and will continue to support the resistance in the region—so long as it is a true resistance and not a false one," he said, apparently referring to Hamas as the "false" resistance, after the Gaza terror group sided with the rebels trying to topple him.

Assad also stressed that countries that want to reopen embassies in Damascus or resume ties with his government must end their support for Syria's rebels. "We are not isolated like they think, it's their arrogance that pushes them to think in this manner," said Assad. "There will be neither security cooperation, nor the opening of embassies, nor a role for certain states that say they want to find a way out (of Syria's war), unless they explicitly cut their ties with terrorism," he added. The United States and most European countries shut their embassies in Damascus after the government's bloody crackdown on protests that erupted in March 2011. Ties have remained severed throughout the brutal civil war that followed, which has since killed more than 330,000 people.

But in recent months there have been reports that Western countries could be seeking to quietly resume ties. In May, the pan-Arab newspaper Al-Hayat reported that French President Emmanuel Macron was considering revisiting the decision to shutter Paris's embassy, though the Quai d'Orsay denied it. France has been a leading backer of the Syrian opposition since 2011, and has regularly called for Assad's departure. Assad's government has recovered large swathes of territory from rebels and jihadists in recent months, its advances enabled by the start in September 2015 of a Russian military intervention to bolster regime troops.

Reuters and AFP contributed to this story.