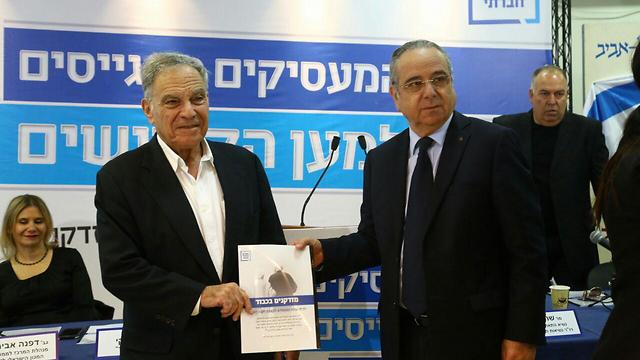 NIS 2.6 billion plan to increase 'dignified living' pensions for elderly is introduces by Manufacturers Association of Israel, which offers to pay for half of it annually; MAI President Shraga Brosh says will waive demand to reduce corporate tax if it helps the plan come to fruition.

Members of the Manufacturers Association of Israel are mobilizing to transfer NIS 1.5 billion annually to the National Insurance Institute (NII) "so that no elderly person will remain poor in Israel," MAI President Shraga Brosh announced Sunday morning at a press conference in Tel Aviv.

The MAI is the representative body of all industrial sectors in Israel, with a membership of over 2,000 organizations and plants responsible for more than 95% of the industrial production in Israel.

The move is part of a plan called "Aging with Dignity," formulated by a committee of expert professors headed by Prof. Eytan Sheshinski.

Today, the elderly in Israel receive an old-age pension of NIS 1,531 per person and NIS 2,301 per couple. However, according to the committee's findings, the amount required for a "dignified living" is estimated at NIS 4,668 per person per month and NIS 7,780 per couple, beyond housing assistance to those entitled to it.

The committee, established at the initiative of the social-democratic Meretz party's socio-economic forum—which the MAI alongside other social organizations in Israel are members of—calculated that the total number of additional resources required for the "dignified existence" of all elderly people in Israel is estimated at NIS 2.6 billion annually. According to their plan, MAI members will allocate half of this sum and the state will allocate the second half. The proposed funding method is a distribution between an increase of 0.36% in NII taxes paid by employers at all wage levels and the state budget.

Brosh noted at the press conference that he had met with Finance Minister Moshe Kahlon and presented the plan to him.

"He is worried about the issue of the elderly, and he saw what we want to do in a positive light," Brosh said, adding that Welfare and Social Services Minister Haim Katz supports the plan.

Katz (L) and Kahlon (Photo: George Ginsberg, Alex Kolomoisky)
In addition, Brosh pledged that if necessary, employers would waive their ongoing demand to reduce corporate tax. "If we have to choose between reducing corporate tax and the elderly, we choose the elderly," he stressed, saying that they will do so as long as the state agrees to invest the same amount as employers, as per their plan. According to the committee's findings, the total cost of implementation of the proposal is expected to reach NIS 4 billion within a decade due to an increase in the number of elderly. The committee determined that in the next 20 years the cost is expected to increase to an average of NIS 50 million a year. "Our old-age pensions are lower than the OECD standard," Prof. Sheshinski said, adding that "the average taxes on employers in the OECD are over 20%. Even after the increase proposed in the plan, we do not deviate from what is customary in the leading countries in the world." Sheshinski said that the plan also "proposes linking pensions to the average wage and not to the current price index, because wages reflect the cost of living, which is rising faster than the index."

The plan anounced at a press conference, Nov. 26, 2017 (Photo: Assaf Shilo, Yisrael Sun)
"This aims to fix one of the most serious injustices in Israeli society, which is the welfare of poor elderly people," Brosh noted. "An elderly person has to decide whether to buy food or medicine, whether to heat his house or cover himself with blankets. This is a disgrace, and we decided to do something about it. "I am convinced that we will work together with the government to rid the elderly and needy of this disgrace. By implementing the plan, 200,000 elderly people living below the poverty line would be able to live with dignity."