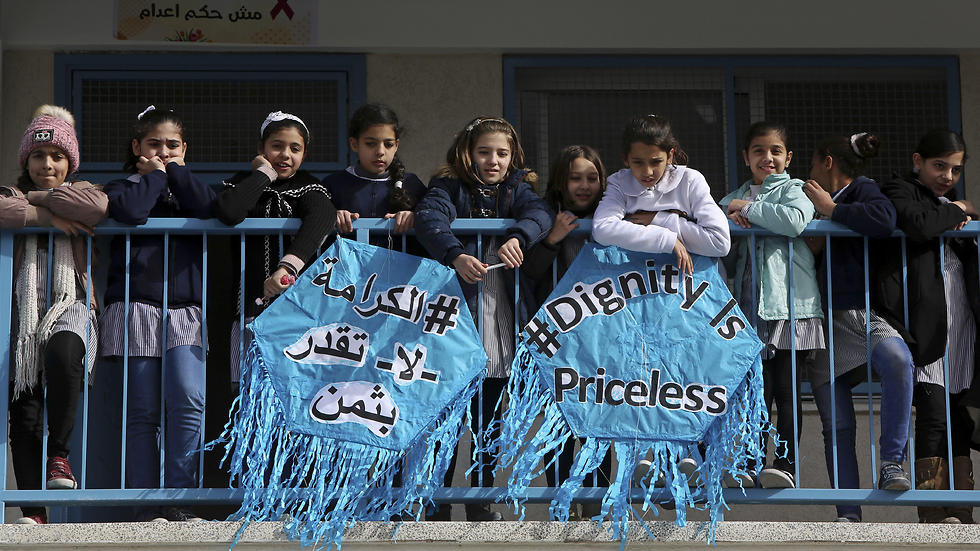 UNRWA chief: US decision to cut funds 'abrupt and harmful'

UN agency for Palestinian refugees launches 'Dignity is Priceless,' which aims to raise $500 million to ensure the agency’s core services are unaffected by US decision to cut $65 million of annual funding to the organization; 'I can't imagine coming to an UNRWA school and say to the students, "Sadly we failed,"' says UNRWA head.

The UN agency for Palestinian refugees on Monday launched an “unprecedented” appeal seeking hundreds of millions of dollars in response to funding cuts by the Trump administration.

Last week the State Department notified the UN Relief and Works Agency that the US is withholding $65 million of a planned $125 million funding installment. It also made clear that additional US donations will be contingent on major changes by UNRWA, which has been heavily criticized by Israel.

Today, there are an estimated 5 million Palestinians refugees and their descendants, mostly scattered across the region. UNWRA provides them with education, health and welfare services.

"The world has to ask itself this question: does the Middle East need more instability? Is it reasonable to think that by reducing amounts to UNRWA one is achieving anything else but greater instability in the region?" he added.

Krähenbühl said the agency will create new funding alliances and get the UN secretary-general involved in high-level ministerial meetings to generate donations from countries.

The “Dignity is Priceless” campaign aims to raise $500 million to ensure that the agency’s core services are unaffected.

“We cannot accept that this investment in education, in health care, and in dignity and respect would be interrupted in any way. It’s much too risky for the entire Middle East,” Krähenbühl warned.

Around 525,000 boys and girls in 700 UNRWA schools could be affected by the US fund cut, Krähenbühl told Reuters while visiting a girls' school in Gaza City. Palestinian access to primary health care could also be impacted.

"I can't imagine to come to this school or to any other school in UNRWA in few weeks and say to the students, 'Sadly we failed.' Failing is not an option," Krähenbühl said.

The US is UNWRA’s largest donor, supplying nearly 30 percent of its budget. The agency focuses on providing health care, education and social services to Palestinians in the West Bank, Gaza Strip, Jordan, Syria and Lebanon.

In Gaza, more than 1.3 million residents—half the population—rely on food and other services provided by the agency. On Monday, Gaza businesses went on a partial strike to protest the economic situation.

Notices on the shuttered doors read “we want to live” and “enough of siege,” referring to the blockade imposed by Israel and Egypt after the Hamas took over the territory in 2007.