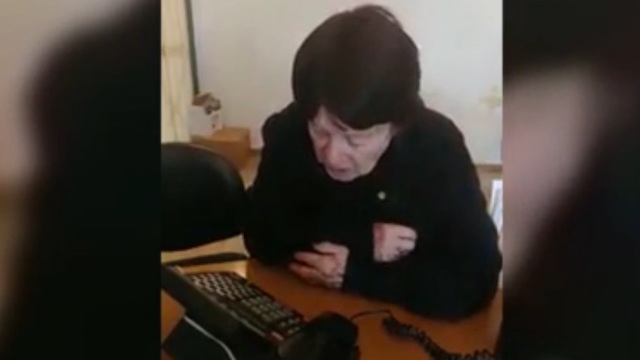 91-year-old Holocaust survivor appalled by Eretz Nehederet's sketch on International Holocaust Remembrance Day; 'I heard on TV they're making fun of Holocaust survivors. How can they do that?' she asks Communication Minister Kara; PM Netanyahu weighs in on incident, writes, 'Cynicism, loss of moral compass have no bounds.'

In a video clip recorded by her grandson, Indig was shown choking back tears in a telephone call with Communication Minister Ayoob Kara.

"I heard on television that they're making fun of Holocaust survivors and Hannah Szenes," she said.

Holocaust survivor Miriam Indig was distraught at Eretz Nehederet's sketch
"I was in the same prison as her and I know how much we suffered and here, now, they're cracking jokes about it," Indig told the communication minister. "While I'm more than 90 (years old), I'm still alive. I lived beneath the earth for months and was incarcerated. They wanted to kill us. "But now I sit in front of the television and see that they're making fun of it and saying it didn't happen? It happened. How can they make fun of it?" a distraught Indig asked.

Indig was referring to one of the show's sketches that dealt with International Holocaust Remembrance Day and with poet Yehonatan Geffen's controversial poem, in which he compared Palestinian teen provocateur Ahed Tamimi—who accosted IDF soldiers—to Anne Frank and Szenes.

Indig's sentiments were echoed Thursday by Prime Minister Benjamin Netanyahu, who wrote in a Facebook post that, "I was pained to hear Miriam Indig, a Holocaust survivor of about 90, so distressed by the fact that Eretz Nehederet insulted both Holocaust survivors and Hannah Szenes, with whom (Indig) was incarcerated before (Szenes) was executed. Cynicism and the loss of moral compass must not have any boundaries."

No comment was received from the comedy show's producers.