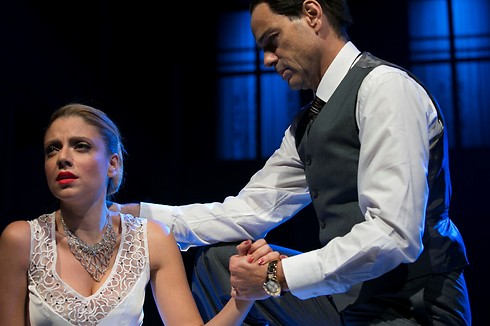 Israeli singer to be cast as Roxie in Broadway's Chicago

Israeli songstress Shiri Maimon received an offer for a starring role in the hit Broadway musical Chicago. If she agrees, Maimon will assume the role of Roxie Hart, previously played onstage by Melanie Griffith, Melanie B and Rumer Willis (Bruce Willis and Demi Moor's daughter). Renée Zellweger occupied the part in the cinematic adaption of the musical.

Guy Pines's entertainment television show reported that executives from the American production came to Israel to watch Maimon star as Evita in her eponymous musical at HaBima Theater.

Maimon's starring turn in Evita caught the eye of Chicago's Broadway producers (Photo: Daniel Kaminsky)
After taking in her performance, they offered to fly her to New York City for a series of meetings, all expenses paid. While the financial aspect of negotiations is still ongoing, they are likely to conclude with the diminutive diva inking a deal to star in the show, following which she and her family will move to the United States in anticipation of participating in performances as early as September. Maimon and her representatives declined comment on this article.

Should Maimon be chosen to star, it would not mark the first time Israeli actors garnered rave review on the Great White Way. Chaim Topol famously brought down the house in performances of Fiddler on the Roof, whereas Theodore Bikel and Mike Burstyn received both popular and critical acclaim for their performances in such shows as "The Rothschilds", "Lansky" and "Barnum."

Chicago was originally a stage play, opening on Broadway in 1926. It was later adapted into a musical, which premiered in 1975 and gave 936 performances, lasting until 1977. In 1979, the play opened in London's West End and ran for 600 performances.

The Broadway production was revamped in 1996, and still operates today. A year later it underwent the same resurgence in London—and became the American musical to be perofmed the largest number of times in the British capital. In light of the musical's success, a movie adaption directed by Rob Marshall was released in 2002 starring Zellweger, Catherine Zeta-Jones, Richard Gere and Queen Latifah. The movie won numerous awards. Chicago's plot plays out in a women's prison. The show revolves around Roxie, who is incarcerated after murdering her lover, and her cellmate Velma, an entertainer who murdered her husband and sister after catching them in bed together.