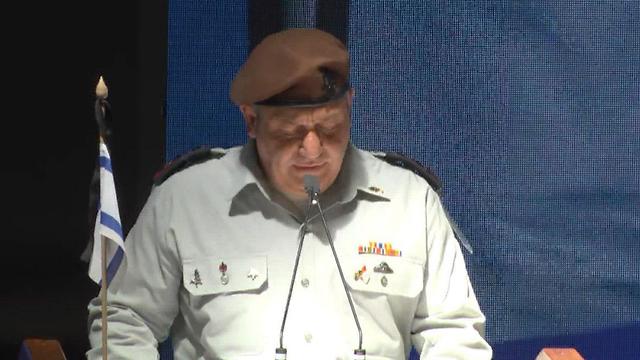 IDF Chief of Staff, Police Commissioner speak at official memorial hall on Mount Herzl ahead of the laying of the national flag on the graves of fallen soldiers; Eizenkot: 'We remember that within the pain of bereavement lies pride in the independence of our state,' Alsheikh: 'Police will never hesitate to risk their lives for public.'

The traditional flag-laying ceremony in honor of IDF's fallen soldiers was held Monday at the State Memorial Hall on Mount Herzl in Jerusalem, ahead of the Memorial Day for IDF Fallen Soldiers and Victims of Hostilities, to be observed from Tuesday evening until Wednesday evening.

Chief of Staff Eizenkot said: "Here, in the State Memorial Hall, we stand together and remember the fallen, surrounded on all sides by names engraved on the walls, names that testify to the heavy price we paid during our years in this land. The walls of the Hall of Remembrance are illuminated by the candles of each and every one of our loved ones who are gone. Soldiers from all walks of life, career officers (and NCO’s) as well as members of the reserves, members of the intelligence community alongside the security forces; from the early pioneer fighters who fell, to the fallen of the past year.”

He also said: “As they fought, thus are they commemorated - side by side. Last week, all the heads of the security forces marched together with the president of Israel on the March of the Living on Polish soil; upright, proud to be a free people in our land.

“The same flag that will be flown on Independence Day in every house in Israel we carried in a place where the freedom of our people was robbed, with pride and with our heads held high. We place this flag today on the graves of the fallen soldiers of Israel and on it a black ribbon, as a symbol of their heritage, which is forever engraved in the memory of our country.”

Turning to the bereaved families he said: “There are many graves on this mount, stones and memorials stand throughout the land, but none of them can bear witness to the character of the fallen as the memory in your heart. Memories reserved for you alone and they accompany you every day. With their deaths we remain at loss. We remember the fallen soldiers and those whose burial place is unknown, and we pledge to continue to act with courage and humility to return them. When we gaze at the graves and monuments, we remember that along with the pain there exists a pride in our national independence.”

Changing the face of society

The Police Commissioner Alsheikh said: “The characteristics of the conflicts over the past decade have raised more and more security challenges for the Israel Police. Few know the intensity of the sacrifice required by the Israel Police to carry out their security mission successfully. Few know how violent the crime against its service members is on a daily basis. Few are aware of what is required of uniformed police officers in order to provide personal security to Israeli citizens."

He added: “We are the bearers of the flag these days, carrying the same flag born by those who lost their lives serving in the police force. The flag is complex, it contains protection of life, and at the same time it contains a struggle to change the face of society, the norms of obedience to the law, raising the bar of mutual consideration, the struggle for democracy and the soul of the state.

(Photo: Reuters)
"The fallen among the Israel Police are fighters who saw themselves as public servants who love people, and the police do not always get the sympathy of the public. Often, they are remembered only when standing in front of an open grave, but the policemen will never hesitate to endanger their lives for the public. Someone has to be there to raise the flag for the citizens of Israel. Words never suffice in bereavement; words cannot describe the intensity of the pain. Often we are amazed by the strength that you draw and empower us. We must ensure that they have not fallen in vain.” Aryeh Mualem, Deputy Director General of the Family and Commemoration Division at the Ministry of Defense, said at the ceremony: "In this moving ceremony, in the State Memorial Hall, we begin the process of placing the flags on the graves of the fallen soldiers of the Israel Defense Forces, one of the most honorable and important functions in the country, conveying a message of honor, tribute, unity, uniformity and equality for every one of the fallen, in any place he was buried.” As Memorial Day begins, the citizens of the State of Israel will bow their heads in memory of the 23,646 IDF casualties of the wars of Israel and the 3,134 victims of terrorism who lost their lives.