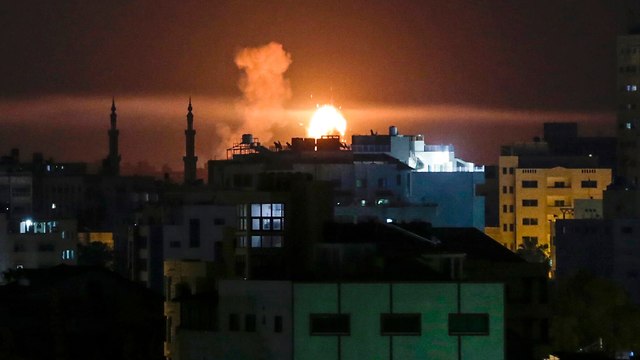 Throughout the night, the IAF bombed 10 targets in the Gaza Strip in three Hamas compounds, including two weapon production and storage sites and one of the terror organization's military compounds, in response to rockets and mortar shells fired at Israel on Saturday evening. Code Red sirens sounded during the strikes and the Iron Dome intercepted one rocket fired at Israel.

The first siren on Saturday night sounded in Sderot and several nearby communities at 12:39 am. The Iron Dome system intercepted rockets fired from the strip. Thirty-eight minutes later, the siren sounded in the same communities once again following additional rocket fire, and the Iron Dome intercepted another rocket.

About 90 minutes later, Code Red sirens sounded in the Lakhish, Sha'ar Hanegev and Hof Ashkelon regional council, and another rocket was intercepted. About half an hour later, at 3:15 am, a siren sounded in the Sdot Negev and Sha'ar Hanegev regional council. The IDF Spokesperson's Unit said the army had detected another rocket fired from the strip.

The IDF Spokesperson's Unit said Saturday night's attack was carried out in response to the rocket fire and terror incidents led and facilitated by Hamas over the weekend, including attempted border infiltrations, hurling grenades and explosive devices, damage caused to security infrastructures and incendiary kites and balloons that started fires in several spots on Israeli territory.

The IDF Spokesperson's Unit added in its statement that "the weekend's events are a continuation of repeated attempts led by the Hamas terror organization to turn the fence area above and under the ground into a fighting zone, to carry out terror attacks, to vandalize security infrastructure and to put the lives of Israel's citizens and IDF soldiers at risk. The IDF is taking these ongoing attempts very seriously, is determined to continue to implement the defense missions and defend Israel's citizens and is prepared to implement this mission as long as it takes."

The IDF stressed that Hamas was solely responsible for the situation in the Gaza Strip. "If its choice to keep following the path of terror instead of solving the Gaza residents' distress, it will keep paying a heavy price that will grow as long as it takes," the army said in its statement.

Meanwhile, the Palestinians released images showing parts of an Iron Dome interceptor that they said had fallen on a house in the Gaza Strip.

On Saturday night, the IAF attacked Hamas military posts in Khan Yunis and Rafah in the southern Gaza Strip on Saturday night, according to Palestinian reports, hours after two mortar shells were fired at Israel.

The Iron Dome missile-defense system intercepted one of the mortars shell fired from the Gaza Strip, while another mortar shell apparently landed inside the Gaza Strip.

The mortar fire was preceded by Code Red rocket-alert sirens, which were sounded three times in the Eshkol Regional Council at around 7:50pm.

Hamas and the Palestinian Islamic Jihad fired 28 projectiles at Israeli communities near the Gaza border on Tuesday morning, with at least two hiting inside the communities, one outside a kindergarten.

Also Saturday, four air tankers and 12 firefighting teams battled a massive blaze that broke out in the Karmia Nature Reserve on Saturday afternoon because of an incendiary kite flown from Gaza.

According to initial estimates, between 2,000-3,000 dunams of the reserve and its surrounding area were damaged in the fire.