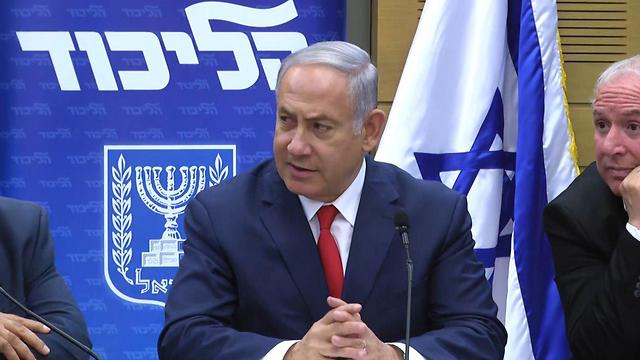 Coalition leaders have apparently reached an agreement according to which the government would dissolve the Knesset and call early elections—to be held in January 2019—if the High Court of Justice (HCJ) does not give it an extension to pass a new IDF draft law.

During a cabinet meeting on Sunday, Prime Minister Benjamin Netanyahu said he wanted to keep the current coalition "almost" to the end of his government's term.

Prime Minister Netanyahu (Photo: Gil Yohanan)
The proposed legislation, which passed its first reading in the Knesset last week, includes planned cuts to the yeshivot's budgets and the use of economic incentives to pressure the Torah study institutions to encourage enlistment, but no criminal sanctions.

The enlistment objectives, as stated in the proposal, are that 3,000 yeshiva students will be drafted in the first stage and 600 will volunteer for national service. These quotas are almost identical to the existing enlistment quotas that exist now.

The ultra-Orthodox Knesset members are split on the legislation. Deputy Health Minister Yaakov Litzman, the most prominent representative of the Hasidic Judaism faction Agudat Yisrael, refuses to accept the bill in its current version. He threatened on Tuesday to resign from the government if the crisis is not resolved within a week.

Meanwhile, MK Moshe Gafni, the most prominent Lithuanian faction representative, and Shas chairman Aryeh Deri, who represents the Sephardi Jews, understand that the proposed bill is the best the Haredim could hope for and wish to pass it now.

According to the Haredi Mishpacha newspaper, Deri and Gafni approached Netanyahu and said they accept the bill as it is.

"We are with you even if (the Hasidim) quit. We have the full support of the Council of Torah Sages. We can hold a government with a 62 majority until the end of its term," Deri and Gafni reportedly told Netanyahu. The prime minister was not thrilled with the offer. "Make an attempt to solve (the issue) amongst yourselves," Netanyahu responded. "If it's up to me, I prefer to pass the draft bill before the Knesset's hiatus or to go to elections." The existing Israeli Defense Service Law expires in September after the High Court of Justice deemed it unconstitutional a year ago, and so the Knesset must pass an alternative law before then.

Coalition party leaders have reportedly been trying to reach an agreeable elections date.

During a coalition leaders' meeting this week, Litzman announced that as far as he was concerned, the current draft bill cannot go up for a second and third reading in the Knesset, threatening that if it does, he would resign.

"You want to go to elections? Be my guest. The bill will go up (to a vote)," Netanyahu told Litzman.

"The bill must be approved, or we go to elections. I want to set a date we all agree on," the premier added.

Education Minister Naftali Bennett suggested turning to the High Court for an extension on the draft bill.

"If we don't get an extension, we'll call elections immediately. If the High Court approves the extension request, the Haredim would have until September to decide whether they can live with the proposed bill," Bennett explained.

"If they say they can't, we'll agree to pass a bill to dissolve the Knesset at the beginning of the Knesset's winter session and go to early elections in January," Bennett added.

Netanyahu, Deri, Gafni, and Litzman agreed to Bennett's proposal. Over the past few days, the Government Secretariat has been working on an extension request to the High Court.

Defense Minister Avigdor Lieberman did not attend the meeting. An official in his Yisrael Beytenu party said that "As far as we are concerned, we have no problem asking the HCJ to postpone the draft bill legislation. However, we will not accept the slightest of changes to the bill's current version, which was formulated by the defense establishment."

A Kulanu official said that the party's chairman Finance Minister Moshe Kahlon is "prepared for elections and willing to hold them whenever the prime minister desires."