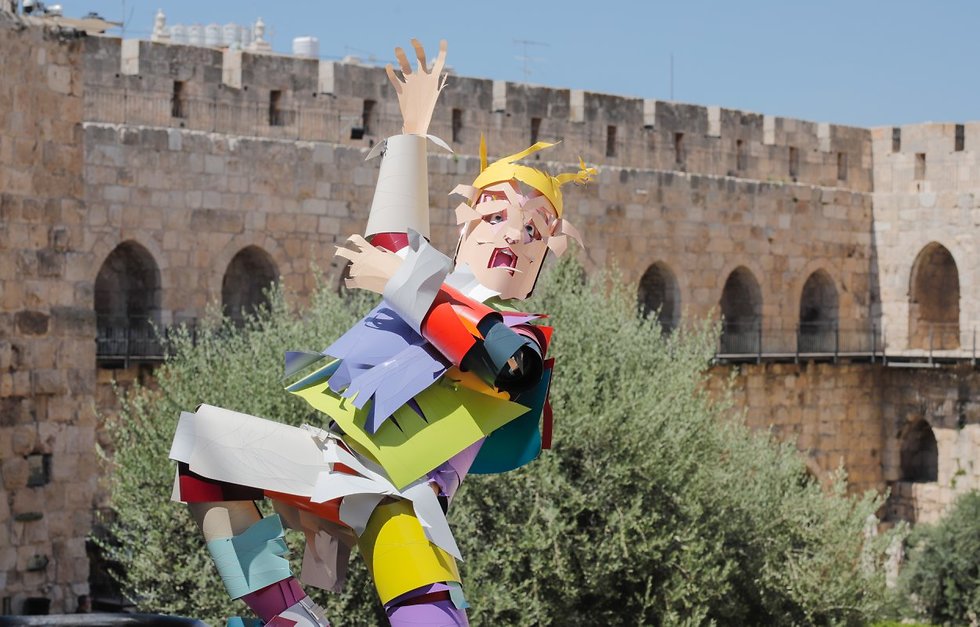 King David, a crusader queen, and Suleiman the Magnificent—these are just some of the ancient figures that have been brought to life by Karen Sargysan. The famed Dutch-Armenian artist spent months creating a series of colorful aluminum sculptures of a slew of historical and biblical characters who helped shape Jerusalem’s history. They are on display at “Rock, Paper, Scissors,” a new exhibition at the Tower of David Museum, which is located in the Old City of Jerusalem. Born in Yerevan, Armenia in 1973, Sargsyan and his family moved to the Netherlands 20 years ago. Though he is now one of the leading paper artists in the world, the sculptor started off in a completely different—and surprising—profession: boxing. “I see a lot of links between art and sports, because sports are a kind of art form,” Sargsyan said in an interview with The Media Line. “I use a lot of the dynamic movements of the human body seen in sports.”

(Photo: Tower of David)
Sargsyan’s creative process is spontaneous and relies on very little planning, though the artist does use a wooden frame as a general outline for his works. For the most part, however, he relies on intuition to produce his multi-layered sculptures. For the exhibition at the Tower of David, he used over 100 kilograms of aluminum sheets and 2,500 knives, all of which he transported from Amsterdam to his makeshift studio in Israel.

(Photo: Tower of David)
“I feel great in Israel because it’s very similar to Armenia with regards to the weather and people’s mentality,” he said. Among other notable figures on display are Eliezer Ben Yehuda, an early 20th century lexicographer who revived the Hebrew language; and Melisende, queen of Jerusalem in the 12th century.

(Photo: Tower of David)
Though the history surrounding these figures is intricate and, for that matter, quite serious, the sculptures depict them in a humorous manner.

“The movement that Sargsyan can create from scissors and very simple materials is fantastic because as you can see the sculptures look like they are dancing,” Eilat Lieber, Director and Chief Curator of the Tower of David Museum, explained to The Media Line. “We invite people to enjoy the beauty of the citadel, to walk inside the archaeological garden, see the remains and meet with different figures of the history of Jerusalem.”

Ultimately, Sargsyan hopes to transmit his art form to the next generation and for this reason the summer exhibition also includes workshops for children, who can learn how to put a cutting-edge twist on ancient history.