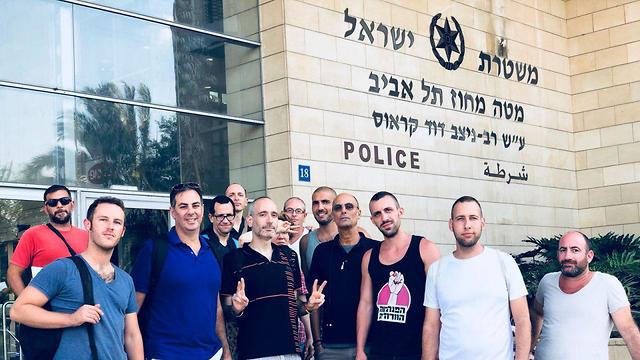 Moshe Hasdai, former IDF major general and director of the youth advancement unit, published a defamatory article on the Channel 7 website, criticising left-wing movements and especially LGBT community, which he said weaken Israel in the eyes of its enemies; Hasdai also criticized IDF's first openly gay major general; Channel 7: 'Article was published due to a malfunction.'

The LGBT community activists filed dozens of police complaints against Moshe Hasdai, a Channel 7 journalist, who published a defamatory article inciting violence against the community.

Hasdai, Major Gen. (Res.), who was a director of the youth advancement unit in Kiryat Arba, founder and director of the Regional Youth Department in the Shafir Regional Council and the director of Mevaseret Zion Absorption Center.

He has in the past called for a destruction of the Palestinian Authority and the Hamas organization, stating that they, along with the Arab MKs, are neo-Nazis.

He wrote that the citizens of Israel are "fighting for their lives," and has also attacked the Israeli Left.

"The power of LGBT and other radical leftist movements, including radical feminism, are penetrating the military and other positions of power, which plays into the hands of the Arab enemy that sees it as an opportunity to weakens our military and national power," he wrote.

"When our enemies look at us and see the story about a major general coming out of the closet, all these demonstrations in Tel Aviv—involving nudity, multiple Pride Parades, disagreements within the general public—because some people feel very threatened by the whole LGBT issue, they interpret it as a weakness and not strength.

"A major general in the IDF must create deterrence in the eye of the enemy … the rest does not interest anyone," he concluded in the interview.

However, Hasdai acknowledged that his words might be upsetting to some and apologized to those he might have hurt.

Channel 7 responded to the uproar following the publication, saying the article was posted on their website due to “a malfunction", and issued an apology via their official Twitter account.

"Due to a malfunction, Channel 7 posted an article containing language that might be interpreted as violent towards the LGBT community. We condemn any calls for violence make sure the discourse remains respectful. The editor who allowed the article to be posted had been reprimanded and the article was taken down. We hope other media outlets adapt similar policies when it comes to incitement against any group in the Israeli society,” concluded the statement.

The activists who filed complaints against Hasdai issued a statement saying the police are not doing enough in order to discourage similar incidents.

"Every year members of the LGBT community deal with attacks of this nature and file police complaints that are thrown out due to a ’lack of public interest.’ This year it went a step further as the community is compared to the worst of all—the Nazis, the murderers.

“This kind of incitement is what leads to the incidents such as Shira Banki’s murder and hundreds of other attacks against the LGBT community which occur every year," said the statement.

The Pink Panthers group also commented on the incident, criticizing the lack of action on the issue from Prime Minister Benjamin Netanyahu.

"LGBT lives are just as important as any other Israeli citizen. We deserve peaceful and secure lives. The thunderous silence of Prime Minister Netanyahu and his ministers on this issue emphasizes the importance of a civil awakening that has been happening over the past few weeks. Without leadership, it is our job is to protect our LGBT brothers and sisters,” said the official statement.