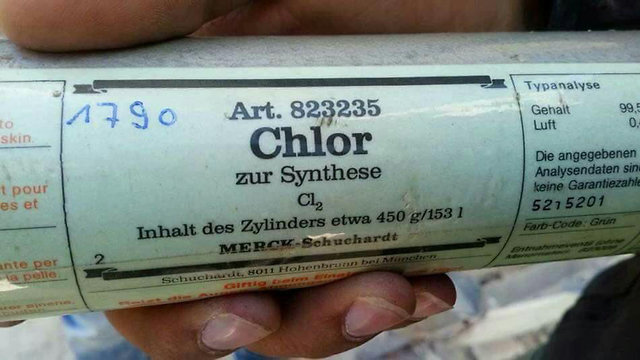 Chlorine gas used against rebels 3 times in Ghouta, Idlib this year bringing to 39 the number of chemical attacks documented since 2013, including 33 attributed to Assad's government, perpetrators of the remaining 6 have not been sufficiently identified.

The three incidents bring to 39 the number of chemical attacks which the Commission of Inquiry on Syria has documented since 2013, including 33 attributed to the government, a UN official told Reuters. The perpetrators of the remaining six have not been sufficiently identified.

Weaponising chlorine is prohibited under the Chemical Weapons Convention, ratified by Syria, and under customary international humanitarian law, the investigators said in their latest report. "To recapture eastern Ghouta in April, government forces launched numerous indiscriminate attacks in densely populated civilian areas, which included the use of chemical weapons," it said, referring to incidents on Jan. 22 and Feb. 1 in a residential area of Douma, eastern Ghouta, outside the capital. Women and children were injured in the attacks, suffering respiratory distress and requiring oxygen, it added.

"The Commission concludes that, on these two occasions, government forces and or affiliated militias committed the war crimes of using prohibited weapons and launching indiscriminate attacks in civilian-populated areas in eastern Ghouta," it said.

A surface-to-surface, improvised rocket-assisted munition had been used in the two Douma incidents, it said. "Specifically the munitions documented were built around industrially-produced Iranian artillery rockets known to have been supplied to forces commanded by the (Syrian) government," the report added. In the northwest province of Idlib - where the United Nations fears a major imminent assault by Syrian and Russian forces against the last rebel-held stronghold - chlorine was also used on February 4, the UN report said.

A child suffering from a gas attack
"Government helicopters dropped at least two barrels carrying chlorine payloads in the Taleel area of Saraqeb," it said, adding that at least 11 men were injured. "Documentary and material evidence analyzed by the Commission confirmed the presence of helicopters in the area and the use of two yellow gas cylinders". The report, based on 400 interviews, also examined aerial and ground attacks by Turkey's 'Operation Olive Branch', conducted with allied Syrian rebels, which wrestled the northwest Afrin region from Syrian Kurdish forces this spring. Afrin's main hospital, a market and homes were hit, it said. "In conducting airstrikes beginning on 20 January, the Turkish air force may have failed to take all feasible precautions prior to launching certain attacks, in violation of international humanitarian law," the report said.

Bashar Assad (Photo: Reuters)
Rebels of the Free Syrian Army were "notorious for their arbitrary arrests and detention" in Afrin, it added. More than a million civilians were displaced in six major battles across Syria during the first six months of the year, many marked by war crimes, the report said. Thousands of displaced civilians still live in dire conditions in severely overcrowded centres, "where many are still being unlawfully interned by Government forces", it said.

Merkel: Germany must respond to chemical weapon use

Chancellor Angela Merkel suggested Wednesday that Germany must be prepared to respond if chemical weapons are used in war zones, remarks that come amid a debate over possible military involvement in the Syrian conflict.

Angela Merkel (Photo: AFP)
Merkel told lawmakers: "to simply say we can look away if somewhere chemical weapons are being used and international conventions are not kept, that can't be the answer." Germans are widely against the country's participation in combat missions and Merkel did not elaborate. Her junior coalition partners, the Social Democrats, have strongly rejected getting involved in the war in Syria and the party's leader made clear Wednesday that it wouldn't agree to any intervention without UN authorization. "Only the Security Council or the UN General Assembly can empower the international community to take military action," Andrea Nahles told lawmakers. "As long as this does not happen, we Social Democrats cannot vote for any intervention by force in Syria." German military deployments abroad require parliamentary approval. In a report based on anonymous sources Monday, Bild newspaper reported the Defense Ministry is examining the possibility of some kind of involvement in future military action if Syria's government carries out a further chemical attack, following a US request to the chancellery. On Monday, Merkel spokesman Steffen Seibert said that "of course the German government is in contact with partners and allies" on the situation in Syria, but did not directly confirm the Bild report. Germany stayed out of previous US-led airstrikes but voiced its support for them. Defense Minister Ursula von der Leyen stressed the importance of preventing the use of chemical weapons, without committing to any specific course of action. "I am fully aware that diplomacy is needed first and foremost, but credible deterrence also is needed," she said. "And we, Germany, cannot act today on this specific issue as if it had nothing to do with us, so I welcome this debate." "We must be prepared, because we do not know what concrete situation we will face," she added.