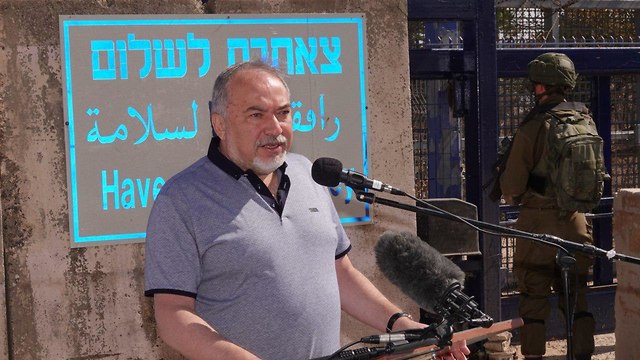 Day after US president's declaration that he 'likes a two state solution', defense minister says 'Palestinian state does not interest me,’ insists ‘Arab citizens demonstrating with Palestinian flags is the main problem.'

Defense Minister Avigdor Lieberman said on Wednesday that he is not interested in a Palestinian state, a day after US President Donald Trump said for the first time since entering the White House that he supports the concept of a two-state solution.

"A Palestinian state does not interest me. I am interested in a secure Jewish state," Lieberman said during a tour of the Quneitra border crossing in the Golan Heights.

"We are facing acute problems here, not just slogans. The fact that 20 percent of the Arab population in Israel participate time after time in riots and demonstrations carrying Palestinian flags— this is the main problem. We have to take care of the Jewish state. The rest is less interesting," the minister stated.

Speaking in a joint press conference on Wednesday in New York with Prime Minister Benjamin Netanyahu on the sidelines of the annual UN General Assembly meeting, Trump said "I like a two state solution. That's what I think works best ... That's my feeling."

On a visit to the Israeli-held side of the Quneitra crossing—attended by the head of Home Front Command, Maj. Gen. Yoel Strik— Lieberman announced that Israel is ready to reopen the crossing point into the Syrian-controlled Golan Heights now that Syrian government forces have regained control from rebels.

"We are ready to open the Quneitra crossing as we did in the past. The United Nations Disengagement Observer Force (UNDOF) has returned to the crossing and they are prepared as well. The ball is now in the Syrian court," Lieberman said.

Military police from Russia, a major ally of Syrian President Bashar Assad, have been patrolling on the Syrian side of Quneitra, where Lieberman said Syrian police and customs officials were also present.

With Israel committed to its non-intervention policy in Syria, Lieberman said the reopening merely means that security considerations now allow the crossing to operate.

The crossing is primarily used by UN personnel stationed there and for the occasional transfer of agricultural products.

In the past, Lieberman elaborated, traffic through Quneitra mainly comprised shipments into Syria of apples grown by Druze farmers on the Golan, and the entry of brides for partners on both sides of the armistice line.

The Syrian side of the Quneitra crossing was captured four years ago by the rebels in Syria, forcing UN personnel to flee the area.

After the crossing was captured, it changed hands many times over the years, until the Assad regime finally took control of it. The minister received a security briefing on IDF's preparations for the opening of the crossing, and met with members of the IDF Liaison Unit which maintains continuous contact with UNDOF.

"We said from the outset that we have no interest in meddling in the civil war inside Syria, what interests us is us to ensuring the safety of the citizens of Israel," Lieberman said.

"The fact that we have come here, to Alpha Gate—and as far as we are concerned UNDOF forces have also begun to operate and patrol the area with IDF's assistance—means that we are ready to open the crossing," he added.

"In terms of the ability to operate the crossing, both from a security and administrative point of view, everything is ready and closed. We will ensure compliance with each and every section of the same separation agreement from 1974. We check ourselves every day, we are in daily contact with the soldiers of the UNDOF who are here on our right," Lieberman told reporters.

When asked whether resuming routine in the crossing is, in fact, a recognition of Assad's regime, who committed war crimes in Syria, the minister replied:

"We have never changed our position, we said that we are not interfering, that is the Syrians' business. Assad is not our friend. "As far as I am concerned, he is a war criminal and all those international bodies that are so concerned about human rights—I do not see them operating in the Syrian side, nor ask the regime for clarifications. We are concerned only about the security of Israeli citizens," Lieberman asserted.

Referring to relations with Russia after Assad's forces accidentally shot down the Russian intelligence plane while trying to repel an IAF attack, the minister reiterated his regret for the deaths of 15 Russian aircrew members. 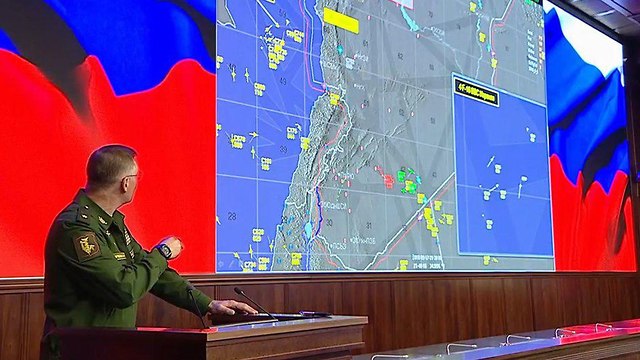 Russian press conference on the downing of the spy plane (Photo: RT)

Despite the diplomatic spar that ensued with Russian, the minister noted that the security coordination has continued.

"The security coordination between the Russian army and the IDF is very important. We have no interest in conducting dialogue with Russia through the media … As far as we are concerned, responsibility for the downing of the Russian plane lies with the Syrian army. All the rest will be discussed with the Russians behind closed doors," Lieberman added.