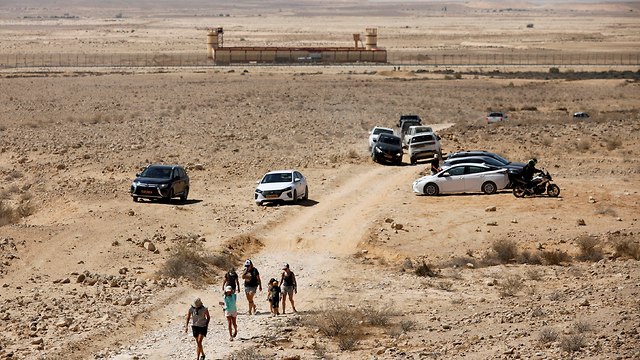 Israeli travelers can catch a glimpse into Sinai desert as they celebrate festival that commemorates the story of God's protection of the Israelites after their exodus from Egypt and 40-year sojourn in wilderness.

A normally sealed-off road along the Israel-Egypt border was opened for Sukkot, giving travelers on the Israeli side a glimpse into the Sinai desert backdrop to the biblical journey commemorated by the festival.

The holiday celebrates the biblical story of God's protection of the Israelites after their exodus from Egypt and 40-year sojourn in the wilderness, which religious scholars say included the Sinai.

Israel's narrow Route 10 runs along the Egyptian border from the Gaza frontier in the north before connecting to a highway into Israel's Red Sea resort of Eilat.

Curving along the Israeli security fence, it is usually closed to civilian traffic and patrolled regularly by the IDF. Egyptian watchtowers dot the other side.

Israel and Egypt signed a peace treaty in 1979, but fighting has raged in areas of the Sinai in recent years between Islamic State terrorists and the Egyptian military.